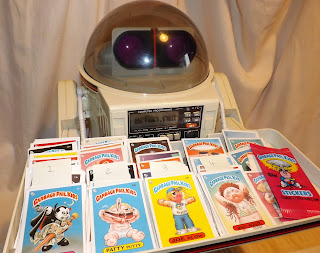 While I’ve been promoting my new Glow- In the Dark Monster StickerClub Omnibot has been doing his bit to raise funds for the studio and discovered another curio from the  80’s...Garbage Pail Kids! There cards/stickers are probably the earliest things I can remember obsessively collecting they were disgusting and my mother didn’t approve of them so naturally I had to have them!  You might even say they en-Grossed me... First produced by the trading card company Topps in 1985 based on an idea by cartoonist Art Spiegelman these cards served as a parody of the phenomenally successful Cabbage Patch Kids dolls that to say were all the rage would be an understatement! For those of you that weren’t there at the time and unaware of Garbage Pail Kids they were essentially cards that featured Cabbage Patch dolls either deformed, as monsters or just being anarchic, smoking, vomiting and picking noses (but in humorous ways and beautifully painted!) As kids we would share them among ourselves and comment on how disgusting they were- each one had a different name (condemning any unfortunate child that happen to share the same name as one of the cards to having to live with that nickname) they even had ‘humorous’ licenses and certificates you could give your friends on the back!

One such day I noticed some older kids hanging around some garages we had near us, because I had numerous run-ins with these bullies in the past and had no intention of encountering them again I picked up the pace, ignoring their name calling. Thankfully they didn’t pursue, this was because they were preoccupied by another kid my age that had a pile of Garbage Pail Kids on him and these older kids were looking through them. I bought my cards and made my way home worried that those kids were still there and as I reached the garages I was delighted to find that the bullies (and kid) were nowhere in sight. It is at this point I learned that even at the age of 7 I had some understanding of the mind of a bully! Following a hunch, knowing that these lads were effectively ‘gits’ I peered through a crack in the garage door and sure enough on the floor within was a pile of Garbage Pail Kids all over the floor! The bullies had taken the kid’s cards and thrown them into this garage! It was at this point that I looked for a branch and proceeded to pull as many of the cards back towards me, collecting quite a haul! Now I’m not sure if this made me a child physiologist or a petty opportunistic thief (you decide!) but I was very pleased with myself, I had amassed the entire run of the Garbage Pail Kids cards by using my head and for the first time ever I actually benefited from bulling (actually the more I think about it this was all wrong wasn’t it?!) but anyway moving swiftly on I would spend hours looking through my collection committing them to memory (more so if they were the ones my mother thought were disguising!)


The cards, Art Spiegelman along with fellow cartoonist Mark Newgarden worked together as the editors and art directors on the cards with artist John Pound producing the art itself. 15 individual series of cards were produced through to 1988 even producing various other spin off products such as sweets, badges and poster books. There was even a live-action movie based on some of the characters (often considered to be one of the worst films ever made... not by me!) and an unaired animated TV series – however the card series lost its momentum somewhat when they yielded to a lawsuit with Coleco, the makers of Cabbage Patch Kids who sued for trademark infringement.  Now no longer looking like the original cards, kids lost interest and the series ended (Trying it one more time in 1992, this time going after the Norfin Trolls craze and creating the short lived Trash Can Trolls series) it seemed like the cards were just a distant memory until 2003,when  Topps reintroduced Garbage Pail Kids with all-new artwork in their ‘All-New Series’ and they have been producing new cards to this day- but those original first three series will always have a special place in my heart, I am confident that they played a big part in making me the well rounded monster obsessed, gross toy collector and artistic individual you see today!

Did you collect them? Can you remember your favorites? ‘Got any swaps? If you sold yours and want to start collecting them again check out our eBay page and pick up a few! By buying from our eBay shop you are supporting my work! If you have any questions get in touch and Omnibot will endeavor to help you!


©Arfon Jones 2019. All images are copyrighted throughout the world.