Did you see me on S4C's Rhannu?

After years of being told I should be a contestant on a game show I finally took the plunge (well I did try to get on Bargain Hunt once but they didn’t want me) and entered as a contestant on a new Welsh language game show, Rhannu, presented by Aled Hughes currently on channel S4C Wednesday nights at 8:20pm. 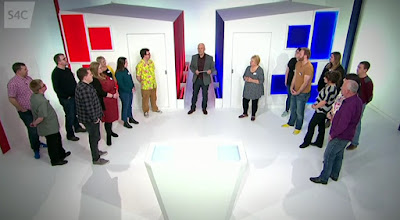 Originally an RTÉ format called Division presented by Anne Doyle this format has been adapted by multi award winning independent production company Cwmni Da based in Caernarfon, North Wales and it sees 16 contestants (The original RTÉ had 32) and two sheds (one red and blue) teams are divided into the two sheds and given a subject, then each shed nominates the most suited contestant to go head to head and keep their team in the game (the losing shed is automatically disqualified until the next episode) after the second round the then winner then gets to pick one of their remaining 3 team mates to go head to head again and try and win the £2,000 prize and a place in the grand final (with a £10,000 prize) 8 episodes were filmed, I was in 7 of them, it was quite an experience and a lot of fun!
What made it interesting (not to mention a little tense!) and a matter of concern for me going in was the likelihood of a subjects cropping up that I would have absolutely no clue about, such as Politics, Sport or what day it was.  Not exactly being ‘up’ on current things there was a high risk of finding myself completely out of my depth, you see dear reader, and this might surprise you- I don’t get out much! I don’t watch the news, I don’t read news papers and most of the movies, TV shows, music and games I follow are from the past...  When the 1990’s came to an end I was a citizen of it, I observed it closely, followed many of its fads and trends but when the ‘noughties’ came along I seemed to go into a sort of hiding- I don’t remember it too well, just flashes, I remember being a little underwhelmed by the Buffy the Vampire Slayer finale. Popstars and I’m a Celebrity seemed to be a thing? I think there was a Crazy Frog there? Anyway, as each year passed I seemed to know less about what was going on around me, and at the end of each year I would watch those end of year review shows and have no clue as to what they were talking about...  and here we are almost 20 years into this new millennium and I still don’t know how I got here! So I knew that if a question regarding a celebrity, sport or musical figure came up and it was a contemporary one I would effectively be sunk!
All I could do was cross my fingers and hope such questions would not crop up! BUT I am a geek after all, and proud of it! I have millions of obscure facts in my head, and there had to be a reason why I’ve been told so many times that I should be on a game show... I can tell you when the first Little Chef opened and I know the name of Supergirl’s cat! I had to hope they would ask something about Daleks, Tiki culture or the works of Vincent Price... they didn’t. In fact on numerous occasions those dreaded before mentioned questions cropped up and I had no clue, and watching back over the episodes that have aired I laugh as I can see from my eyes that I have no idea what everyone’s talking about! (see photos) A glazed over look, grateful that it isn’t me out there answering on our behalf! Trying to make up for my lack of knowledge with 'team spirit' and 'encouragement' it’s an interesting format for that very reason though, as a contestant can potentially get through to the final round by not answering a single question and scooping the prize money by being fortunate in knowing just a little more than their opponent! I got close mind, but I was not picked for the final round on the grounds of being an intellectual ‘threat’ (a compliment I gladly accepted!) But anyway, there I was  in the blue shed during the first round of episode 5 when ‘Computer Games’ was subject of that round...   Most of my team mates instantly waved it away, saying they knew nothing about games, “I know a little” I said... “BUT, I don’t play modern games or consoles....” Atari through to Play Station in the mid 1990’s was the limit of my knowledge- I wasn’t sure if I was really the right one to go out but  it was decided that I was the closest to an ‘expert’ we had!  Having again established that I am more of a retro gamer and knew nothing of new games my first question was, what is the name of the outlaw gang in Red Dead Redemption 2? ...GULP! Being a game that came out the previous month I had to make a guess and I was wrong.... GAME OVER! I felt awful letting the entire team down like that and had I just had one question right, at least proving I knew something about this topic would have been something, but no, it was not to be. Then came episode 7....

Episode 7, the blue shed, first round.... Superhero movies! Everyone turned to me! My confidence had been bashed after the last time and being somewhat behind on the more recent superhero movies I wasn’t so sure I was the right one to go. As the team contemplated who to send out myself or Rhydian (who also believed it should be me!) Geek Mode seem to activate within me and I started reeling out comic book/ superhero trivia! When it was put to a vote I was selected (4 to 2) so out I go! GULP! as I walked out into the glare of studio lights I suddenly realised, “screw this up and you can hand in your comic book nerd badge at the door!” No pressure... As I suspected my opponent from the red shed was Mirain Rhisiart who had trampled us all in a previous episode with her knowledge of all things Harry Potter... No pressure! Introductions out of the way Mirain was asked the first question, which she promptly got correct! Then it was over to me! I was asked, from the three characters Deadshot, Harley Quinn and Green Arrow who was NOT in the Suicide Squad- Easy!  I was nervous and looking back over the episode last night I can see how nervous I was, my confidence was all over the place! But once I got past that first question I started to feel more at ease, “at least I got one right!” I thought. A question about Deadpool and another point for the red shed then it was back to me- Which one of these Batman movies did Christopher Nolan NOT direct, the answer was Batman Returns, “are you sure?” “YES!” ...point to me!
Then Mirain was asked what I consider to have been the most difficult question of the round, What is T'Challa’s sister called in Black Panther? it wasn’t the answer she gave and then it was my turn.... the decider! No Pressure! "Which city was Robocop set?” I knew it, but was careful to add “I think...” before giving my answer so as to not sound arrogant, “Detroit” and that was it, I won the round! (Although I instantly questioned if Robocop is an actual ‘superhero’ movie- but it was recently put to me that ‘superhero’ by definition is someone with an ability that no one else has that is using that ability for good) So there we go, I won! And against an extremely worthy opponent! Red Dead Redemption 2 was behind me, if anything I had been redeemed!  Round 2 came and went and it was back to blankly staring at the screen while quiz aficionado Huw Pritchard answered questions on national parks, which got us through to the third round!  When asked to select one of us to go head to head against he chose not to pick me on the grounds we have similar interests and felt we might be too evenly matched and so I didn’t get to go through to the final round and answer questions on women in sport! (PHEW!!) Meinir Ann Thomas was selected and bless her she did her best but it was Huw’s day and he won, pocketing £2,000 and a place in the semi final!

So there you go, a short/ abridged spoiler filled account of last night’s episode for the convenience of those of you out there not fluent in Welsh, if you are fluent then you can follow this link and watch the episode on Clic or iPlayer. Be sure to catch the final episode of this series next week and why not give it a go yourself? They are currently looking for contestants for the second series and I highly recommend it, I had a great time with my highly knowledgeable fellow contestants/ opponents they were a great bunch of people and each one of them deserved a prize! My sincere thanks to everyone at Cwmni Da, each one of them made us feel comfortable and at ease while making great telly!


© Arfon Jones 2019. All images are copyrighted throughout the world.
Posted by Arfon Jones at 4:53 pm