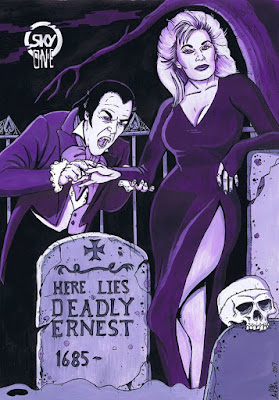 I tried to get this painting and post out for Halloween 2016 but with October being a busy time for me I missed the deadline... No matter, better late than never! Last time I tackled horror host Dr Walpurgis (later changed to Dr. Terror) host of the Vault of Horror which ran on BBC 2 from 1992 to 1996 and I mentioned that some regard him to be Britain's’ first television horror host and that this was not in fact the case. The first British horror host was Deadly Ernest who had actually left our screens a year before the good Doctor Walpurgis made his debut having been on Sky Channel (later renamed Sky 1) since 1985 hosting a Friday night horror show entitled, The Deadly Ernest Horror Show.
Ernest (not to be confused with the Australian horror host Deadly Earnest) was a vampire that introduced the Friday night horror movie and if one consults the all knowing internet about the show Jack Hardy is credited for playing Earnest however, Jack Hardy was in fact one Mr. Jim Bywater, actor of stage, screen and television roles perhaps most notably playing Wilf Starkey in Coronation Street. There is despairingly little about him or the show online, and not even Sky 1, the very channel that aired the series could help me in my research, a great shame because Ernest was one of Sky's regular faces back in the day and when the channel celebrated its 5th Birthday in 1987 Ernest made up the group of Sky presenters singing along on Anita Chellamah's 'Join the Family of Sky' music video alongside fellow presenters such Anthea Turner, Tony Blackburn, Pat Sharp and DJ Kat! What information I have been able to “dig up” on Ernest/ Jack Hardy/ Jim Bywater has been meagre but in an interview for the October 20th – 26th 1990 edition of TV Guide apart from learning that he liked Thunder and lightning, that he rode a motorbike, stroked a lion and he had once ridden on a dolphin. He was also a horror movie fan, “I really like a good horror, my favourite is the one where the chap’s head explodes (Scanners) and I like the Omen films.” But confessed to not watching all the movies that featured on his show, “Some of those Japanese films like Godzilla are a bit silly, and then there are things like Plan Nine from Outer Space where you’ve got men wandering round in bits of carpet.” When asked about fear he surmised, “I think fear is all in the imagination and that’s what film makers rely on- the audience imagining the worst.”

When Rupert Murdoch expanded Sky's service and formed the Sky Television Network in February 1989 Ernest’s show was 're-vamped' in September of that year with a new wardrobe and sidekick, Scarlett Aorta, played by model and former Page 3 girl Jilly Johnson. Also a self confessed horror fan, listing American Werewolf in London as her favourite, “The music is fantastic, the special effects are great and the leading man is very hunky, even if he needs to shave from time to time, when there’s a full moon!” she threw herself into the role. I was fortunate to be able to come in contact with Jilly who informed me that she loved playing Scarlett and that the scripts on the show were brilliant and that the set writer and director were always happy for them to improvise. As for the movies that featured in the early days YouTube gives us some idea, 'The Late Nancy Irving' and ‘Sweet Scent of Death’ are mentioned suggesting that they aired the feature length episodes of Hammer House of Mystery and Suspense from 1984. Vintage issues of TV Guide once again came to my aid due to the main British listing magazines not publishing cable and satellite listings until 1991. Here is an ongoing list of episodes that I hope to keep open and update accordingly.


I didn't actually get to experience Deadly Ernest the first time round, despite constant desperate pleas from my brother and I to our parents our household didn't join the Sky revolution until around 1994 before that occasion it was recordings of movies, or shows such as ALF, WWF Wrestling and The Simpsons recorded by family and friends already signed up to Sky but even then it would seem that Sky had laid Ernest to rest, the Friday night film ran without him all the same but under the guise of Friday Fright Feature. RIP Deadly Ernest, 1685- 1991 Britain's First Horror Host.


Were you involved in the show? Have any other information that could help out my research? Drop me a line or e-mail direct arfon@arfon.net and help me get this show and those involved the recognition they deserve!