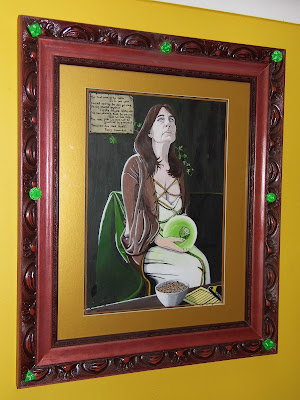 Dungeons and Dragons, much like Warhammer (previous post) was something that I always wanted to be a part of yet, despite watching the cartoon series during the 1980's, playing with the action figures and reading a few Endless Quest (choose your own adventure) books I never actually played the game itself until I was in my late teens in the late 1990's. A great shame because I always felt that I would have submerged myself in it had I known someone that played D&D, I didn't so it passed me by.
So when I discovered that Mrs Jones was a keen D&D'r back in the day it pressed all the geek buttons that I required in a mate, and I fell in love with her all over again! So much so that it was commemorated in this painting (named after her character name) that I painted for her that not only marks her Dungeoneer days but also my love of Pre-Raphaelite paintings. The A3 acrylic painting contains a poem wot' I wrote and some Victorian symbolism finished off with a frame with six varieties of jewel like Dungeons and Dragon polyhedral dice embedded in it.