HorrorCon 2017: The day I travelled to Rotherham to meet Elvira Mistress of the Dark in a steel mill 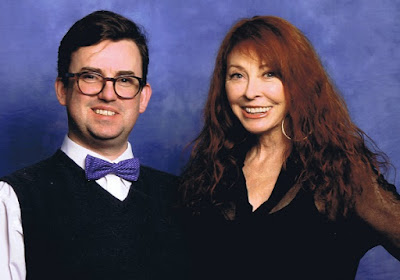 January 1992, I walked into our local Woolworths armed with my recently acquired 13th Birthday money and made use of their '3 VHS' for 2' deal. The videos were Labyrinth, The Monster Squad and Elvira Mistress of the Dark, and I suppose that day played a part in making me the well rounded individual you know and love today. Like a great many of us in the UK at the time I didn't know who the gal that, “put the boob in boob tube” played by Cassandra Peterson was but her 1988 horror/ comedy set that right and I have a been a big fan of the Valley girl Vamp armed with cleavage and a quick wit ever since. She is and always will be my favourite horror host, because (obvious two reasons and sniggering aside) she was my first horror host, and she was the one I grew up with. She has been a familiar figure throughout my life and even though the VHS's that I bought that day have long gone my affection for the character still lives on and I continue to watch her DVD's today, often playing in the background while I paint. I have long had a list of people that I would like to meet and she was at the very top of it, and this weekend I was able to have the genuine honor of meeting Cassandra Peterson at this year's HorrorCon.

© Arfon Jones 2017. All images are copyrighted throughout the world.
Posted by Arfon Jones at 12:48 pm