The Heart of Sut ‘sneaky peek’ 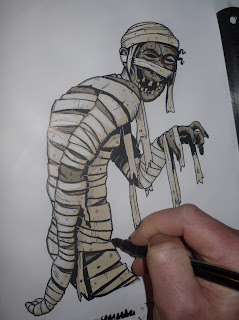 You can’t beat a good old-fashioned mummy, I love ancient mummies both historically and in popular culture I enjoy seeing them in films and museums! So imagine how pleased I was to discover that the ‘Heart of Sut’ adventure card game that I was working on needed not 1 but 3 mummies! I have illustrated 67 character/ weapon and monster cards for this game and even though the developers have been releasing a few preview images from the game on their facebook page I thought I would share this one on here. As I said the Heart of Sut is an Adventure card game which is aimed at 2-6 players set in a Steampunk Universe created by my good friend Chris Phillips and my arch nemesis James Richardson-Brown. Join the Heart of Sut group, show your support so as not to invoke the mummy’s curse…

© Arfon Jones 2013. All images are copyrighted throughout the world.
Posted by Arfon Jones at 2:07 pm