Reflections of a Doctor Who fan: The grumpy one…

It seems to me that a while a great many of us are celebrating Doctor Who’s 50th anniversary this year others are simply preparing for Doctor Who’s 10th anniversary in 2015… It’s official, the world loves the programme and as happy as I am to see the world finally ‘getting’ Doctor Who there is a small part of me that gets somewhat ‘disgruntled’ shall we say? At some of the programme’s newest fans that proceeded tell me how great it is… “YES I KNOW ITS GREAT! I told you! Remember?! The guy walking around with a Doctor Who scarf before the series returned in 2005!” (Deep breath) Please don’t misunderstand me, I am pleased to see people enjoying Doctor Who, my only objection is when I see people (more often selling something) trying to pass themselves off as Doctor Who fans when in reality they have only actually watched ‘portions’ of the new series.  I can confidently declare my self-a fan and assert my devotion to this programme by proudly telling you that I was born the very same day that part four of ‘The Power of Kroll’ aired and add that I live 32.9miles from the Death Zone… There is one slight problem with complaining about new fans however, I suppose it does makes me somewhat a hypocrite, because Doctor Who was into its second decade by the time I discovered it… In fact in the days before the new series aired and the first 26 year run was summed up under the guise of ‘classic’ Doctor Who the era of the show that I held dear was very often sneered upon by other fans… When ever I am asked “who’s’ your favourite/ who was your Doctor?” my answer is always “Colin Baker was my first Doctor However, Sylvester McCoy is MY Doctor… Naturally I love Tom Baker’s Doctor but William Hartnell is THE Doctor..” then I will list the others in order of preference…  So as you can see I came in during the Colin Baker/ Sylvester McCoy years. The tail end of the series if you will. 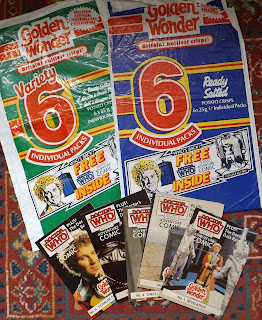 For the past 10 years I have been a member of the Doctor Who collectors site Richard Who and on my profile I mentioned that I had an interest in Doctor Who since finding my first Doctor Who comic in a Golden Wonder multi pack. This is absolutely true, Tom Baker had left the role that made him famous when I was only two years of age, I was aware of Peter Davison being the Doctor but (through Blue Peter and various BBC links) being the only science fiction fan in the family I never saw the programme.  It would take a free comic from a Golden Wonder multi pack to prick my interest in Doctor Who and so I watched it.  By this time the Doctor was in his 6th guise and played by Colin Baker, I only ever saw one of his stories on their original airing and that was the concluding part of ‘Attack of the Cybermen’. The showdown against the Cybermen was firmly etched into my memory I absolutely loved it! But then something happened the show seemed to just disappear! Being only six at the time and with no concept of TV schedule changes I was blissfully unaware that I was missing the Doctor’s exploits as I enjoyed the A-Team on ITV!  For a short time Doctor Who disappeared off the radar for me, that was until 1987 when the 7th Doctor was introduced.
As I previously mentioned Colin Baker was indeed my first Doctor but Sylvester McCoy was MY Doctor and his tenure was when I became a fully-fledged Doctor Who fan. I read the comic strips in Marvel Bumper Comic, fought Daleks and Cybermen in the school field and I had a crush on Ace… But more importantly I watched the programme as they went out (apart from the occasions when my mother watched Coronation Street on ITV) I have very fond memories of returning home from Cubs and watching the 7th Doctor and Ace battling Daleks, Cybermen and Haemovores. Enjoying any additional coverage the programme received during its 25th anniversary blissfully unaware that the programme was facing its demise in 1989. As I entered the 1990’s I continued to be a casual fan of Doctor Who receiving VHS’ as gifts at Christmas and birthdays with my interest being nudged along with the 30th anniversary special ‘Dimensions in Time’ in 1993 and the television movie in 1996. I was an art student when Sylvester McCoy bowed out of the role, I was sad to see ‘my’ Doctor regenerate to Paul McGann. But I enjoyed the story enough to want to see a new series, but alas it didn’t happen and we wouldn’t see any new televised stories for another 9 years but when it happened I was delighted with it, in fact I embraced it! So, I shall now try to wrap up this rant by (attempting) to make a point . When I became a fan of the show I made an effort to seek out and watch the Doctor’s previous stories before declaring my fandom to the world. So please, if you love the show and you want to wear a fez and bow tie go for it! Have fun! You believe the Weeping Angles to be the best monster ever? Fair enough, you are quite welcome to your opinion just do me a favour though, watch ‘An Unearthly Child’ through to ‘Survival’ before you do so. I think you will be pleasantly surprised…

© Arfon Jones 2013. All images are copyrighted throughout the world.
Posted by Arfon Jones at 2:38 pm