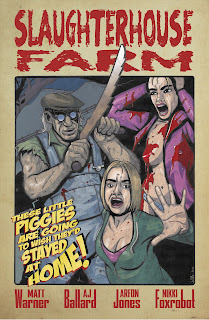 I finally have a moment to write about the marvellous time I had at this year’s Wales Comic Con Wrexham! I was there along with the Hellbound Media team to officially launch Slaughterhouse Farm#1!
I am happy to report that it was a successful launch with a great many issues being sold on the day, but first a little about the comic itself…
As I have hinted in previous posts Slaughterhouse Farm is the latest 24 page new comic book by Hellbound Media, written by AJ Ballard and Matt Warner, lettered by Nikki Foxrobot and illustrated by me! I also did the cover, which was coloured by Steven Denton.  This horror tale has been set in the mountains of Snowdonia and serves as a blood-soaked homage to the 70s and 80s horror classics with a Welsh twist that has received very positive feedback from horror writers and horror fans alike. As a horror fan myself I was delighted to be approached by Hellbound to join this project as I thought it was about time North Wales had it own Jason or Leatherface! I have seen countless films with a great many feature a killer inhabiting ridiculous locations, Snowdonia on the other hand would be an ideal setting for such a scenario. With Snowdonia in mind I imagined the killer inhabiting the landscape and farmlands of Sir Kyffin Williams and I wanted a killer that reflected this design. I depicted him as a large figure, gnarled by age and the weather rather like a hillside tree, a lumbering figure of a man complete with flat cap! He has a rough and jagged face, which I based on actor Rondo Hatton. It can be ordered on Hellbound Media’s site but be warned, its for over 18s and those who are not easily offended as the comic contains scenes of graphic violence, sexual scenes and bad language! 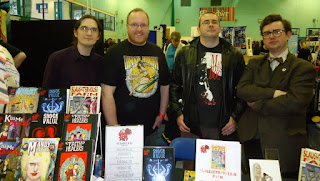 The convention itself was fantastic and we had a wonderful time at the launch I was on hand to sign the comics alongside the comic’s writers AJ Ballard Matt Warner and the other half of Hellbound (and the man responsible for the brilliant Gabrell Cushing series) Mark Adams. Later in the day were joined by the ever delightful (not to mention current cover model of Skin Deep Tattoo Magazine) Siân Davies who played ‘the bloody bride’ for the comic’s promotion, which was inspired by the Pin-Up I created for the first issue. We had a hectic (but immensely enjoyable) day discussing horror and comics with several visitors to the table. At one point I went off to have lunch and was delighted to see so many comic buying folk dispersed amongst all the fantastic Cosplay perched at various points of the Con reading their issue of Slaughterhouse Farm#1! The event organisers should be commended for doing a bang up job, there were amazing guests there along with a friendly atmosphere amongst the crowd.
Many thanks to everyone who stopped at the table to chat and pick up an issue, if you were unable to make it to Wales Comic Con no matter! You can still order your very own copy via the Hellbound Media website! 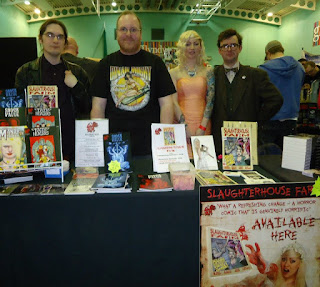 © Arfon Jones 2013. All images are copyrighted throughout the world.
Posted by Arfon Jones at 4:03 pm