A Monster Memories Special: Morgusian Inspiration from Morgus the Magnificent 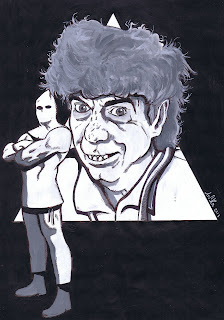 Those of you that regularly read my ramblings will have noticed recurring, theme in my posts, monsters, nostalgia and things that I grew up with as a child that somehow managed to both intrigue me and influence my work. But today I would like to devote this post to something that I did not actually grow up with... But I know that had I had this as a child I would have undoubtedly lapped it up! namely the American institution known as the TV ‘horror host’.
For those not in the know (there’s always one) when the classic Universal horror movies were syndicated to television networks they were introduced by a ‘horror host’ and it became tradition that spanned throughout the 1960s, 1970s and 1980s. I watched a great deal of classic horror and science fiction movies on Friday and Saturday nights and even though I was aware of horror hosts, such as Vampira and Zacherly through books and magazines I was yet to experience one for myself. Naturally I was aware of Elvira Mistress of the Dark, but only through her movie, not her show. By the time the United Kingdom had its own horror host I was in my teens, that horror hosts was the BBC’s wonderfully devilish Dr Terror. Sadly his TV appearances were short-lived. In fact not many recall his tenure (I certainly do because he followed right after Ghostwatch on BBC 2!) But Dr Terror would educate us about the film we were about to watch (with segments written by horror connoisseur and novelist Kim Newman) the segments became shorter each year until they finally fizzled out along with the 90’s themselves BUT more on Dr Terror at a later date…
Fast forward several years to the day I was able to upgrade from Dial-up to Broadband and use Youtube to its full potential. During the Dial-up days I had been further educated about horror hosts, and granted the ability to order Elivra’s dvds. But now, thanks to Broadband I was able to check out the works of other horror hosts for myself! Of all the ones I watched there was one clear winner for me that was, Morgus the Magnificent! 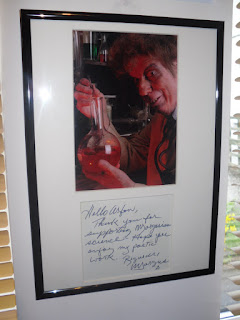 Unique to New Orleans only, ‘The House of Shock’ first aired in 1959 and starred Morgus created and played by New Orleans radio and TV personality, Sid Noël. Inspired by Don Quixote the segments told of Dr. Momus Alexander Morgus, a devoted mad scientist living in his laboratory atop the "Old City Icehouse" in the French Quarter. Each week accompanied by his silent assistant Chopsley he would unveil a new invention designed to improve the world and each week it would fail. ‘The House of Shock’ was an overnight success making Morgus a household name. Inspiring a ‘The Wacky World of Doctor Morgus’ movie in 1962. The show continued through to the 70’s only to be re-launched in the 80’s with 52 all new episodes. These episodes can still be seen in some parts of the US, while the good Doctor’s alter ego Sid Noël Rideau is now the force behind the New Orleans Public Library's Internet Story Club of America.  An online K-12 reading program featuring 52 original fables written by Rideau that teach youngsters about values, responsibility, honesty, self-respect.
Being a fan of mad scientist movies his style appealed the most to me. I enjoyed what clips I could find, savoured any new ones that found their way to the internet, and constantly visited morgus.com for further developments. I ordered The Wacky World of Doctor Morgus’ on dvd. And followed it with the highly recommended ‘Morgus Presents Volume 1(The first-ever authorised release of the Doctor's experiments on home video dvd) not to mention the highly recommend ‘Hearse-ry Rhymes’ CD which feature a collection of poems written and narrated by the good Doctor himself. But the icing on the cake had to be the hand written note I received from him thanking me for my support! The note now hangs with pride in my laboratory/ studio delivering hours of Morgusian inspiration! To anyone living in the New Orleans, Louisiana area or followers of the horror host genre I am almost certainly preaching to the converted here, and will know full well what a legend he is. But those of you that are not familiar with the works of Dr. Momus Alexander Morgus and don’t know the sign of the “higher order” check out his web site and find out more and help support Morgusian science! Tell him Arfon sent you!

© Arfon Jones 2013. All images are copyrighted throughout the world.
Posted by Arfon Jones at 7:04 pm