Ghostwatch: Behind the Curtains DVD 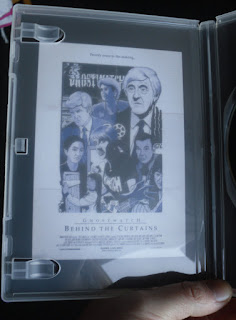 This week I received an advanced copy of the eagerly awaited Ghostwatch: Behind the Curtains documentary dvd. This retrospective documentary about the programme features interviews with cast and crew that discuss its production and how it has endured over years. I often mention Ghostwatch and my love for it on this blog, I watched the original broadcast back on in 1992 and it made an impression on me. For many years I kicked myself for not recording it (the BBC never dared to repeat it) and so I was over the moon to discover that the BFI had released it on dvd. Sitting down to watch it again 16 years later I was not disappointed with it and since that second viewing I have followed this documentary project with great interest even creating two pieces devoted to it, one of which was commissioned by the project itself. ‘Halloween 1992’features the cast along with some familiar elements from the show, it was used as a teaser poster on the 20th anniversary and it can be seen on the inside of the dvd which is now available to buy.
Be it an interest in horror, you grew up in the 90’s and remember this classic horror drama or better still it made a lasting effect on you I urge you to buy it and check it out.
My sincerest congratulations to all involved in the production of this wonderfully constructed and highly informative documentary.

*UPDATE* The North Wales Chronicle write a little something about it, ‘Artist Arfon's ghostly work for new documentary’

© Arfon Jones 2013. All images are copyrighted throughout the world.
Posted by Arfon Jones at 5:24 pm