Yet another weekend out of the studio (This is starting to become a habit!) a weekend of both business and pleasure (but mostly pleasure). Visiting two of my favourite locations in Bangor, having returned home I attempted to sum up the weekend on Facebook. Thinking a list would be boring I wrote, “A marvellous weekend of science history and art, very pleased with how it all turned out”. Moments later it was suggested that I was somewhat “mysterious” by my dear friend Rachel White! Explaining how I thought a long-winded run-through of my weekend would be boring to read she answered, “you're wrong matey!” So, if that’s the case please permit me to run through my Bangor Science festival weekend for you all!

Bangor Science Festival is part of the National Science and Engineering Week organised between the Dr Tom Parry Jones Endowment Fund, (Established by Dr Tom Parry Jones OBE, inventor of the electronic breathalyser to encourage young people to develop careers and entrepreneurship in science and technology.) and Bangor University. Each year they offer something “for everyone, with activities for families and schools groups, adults looking for entertainment and stimulating debate, or professionals interested in the latest research.” With that in mind off we went my family in tow.
First stop, the Basement floor where we were treated to a guided tour of the University’s aquariums, a genuine treat, as it’s not usually open to the public. Living within the countless tanks were a wide array of species found in the Menai Strait along with tropical fish, guppies and cichlid fishes from Africa. (I was equally interested in the archaeological finds discovered at the bottom of the Menai displayed around the room!) Studies were being conducted on the behaviour of fish. One such experiment into their mating habits had Beth comparing it to a form of piscine speed dating… 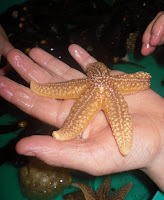 The marine biology theme continued on the ground floor as we were invited to ‘dip’ into a rockpool, visitors were offered the opportunity to handle species found living at the bottom of the Menai Strait including the Sea Mouse, Porcelain Crabs and Sea Stars! We also saw a row of shark egg cases displaying the various stages of development complete with shark young!
Then on to the next desk, which I had spied on the way in, I was eager to check it out as it had a replica T-Rex skull balanced on it. Scattered alongside were various fossils along with the opportunity to excavate an Ichthyosaurs fossil, which my daughter and I did. I was then challenged to name all the dinosaurs on display, so I did just that. 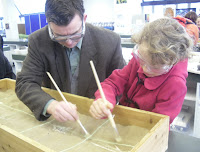 We had the opportunity to look at snake fangs under the microscope before crossing over to the Natural History Museum collection. It was nice to finally be able to show the collection (which had been updated) to Beth and my daughter who were equally impressed as I was several months back, this lead us rather aptly to the ‘Hidden Worlds: Hidden Artists’ exhibition. 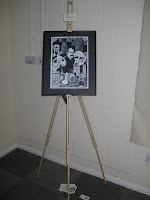 I mentioned my involvement with this project in the last post but, for the last 5 months I have been visiting the Natural History Museum collection with other local artists, drawing inspiration from the exhibits and we presented our work for the Science week festival.
I was recently quoted by the University’s events page to help promote the exhibition, "'it has been exciting being able to leave my studio and sit amongst all the wonderful specimens housed at
the Brambell Building museum, long may it continue to educate and inspire others as it has me". The pieces I exhibited were “Philip J. White (1862- 1926)” a portrait of the first curator of the Zoology Collection Professor Philip J. White (and 18 specimens from the collection) and by popular demand ‘Womblus Wimbledon Vulgaris’ who watched over the works of Julie Gritten, Lisa Hudson, Harri Carmichael, and Lindsey Colbourne. Each piece reflected our take on this collection. It seemed well received by all that wondered in to have a look. My fellow Hidden artists did an amazing job, it was a delight working alongside them

When I discovered that Treborth Botanic Garden was opening its doors to the public I was delighted, having visited before I wanted to further explore the grounds! This beautiful location located next to the Menai Suspension Bridge crossing was originally developed as a Victorian tourist destination, designed by the great Sir Joseph Paxton. However funding issues resulted in the project being abandoned leaving the grounds to revert to pasture and woodland until Bangor University bought the land in the 1960’s making it the beauty spot it is today.

So we returned to Bangor to explore Treborth’s Glasshouses for ourselves. I rarely have the opportunity to post about my botanical pursuits on here (I hope to rectify that in a future post). I have had a long-standing fascination for Ferns and Insectivorous Plants, so naturally making my way around Treborth’s glasshouses was a pleasure. The icing on the cake had to be various species of reptiles on hand, to my delight one of them was a Chameleon who will soon be moving into the glasshouse! 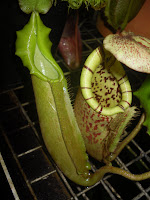 Equally interesting (for a nerd like me) was being allowed to visit the Rhizotron! This newly refurbished underground laboratory allows for easy access/ viewing of the soil and root systems. Also on hand were several microscopes that we couldn’t resist looking at! I had a marvellous time, I hope to go back there again very soon. And that was Bangor Science Festival Weekend, 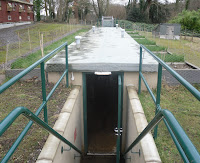 we all had a wonderful time and I was privileged to play a (granted a minute) part in it. If you are a nerd/geek like me but you didn’t make full use of the festival this year be sure to look out for next years to assure that you too have a “A marvellous weekend of science history and art”!


© Arfon Jones 2013. All images are copyrighted throughout the world.
Posted by Arfon Jones at 8:55 pm