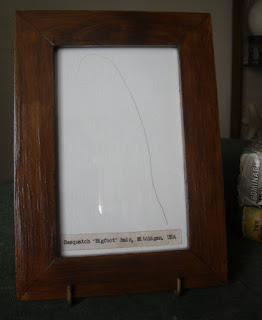 Following on from the footprints I have another cryptid specimen from my Cryptozoology corner to share, a single strand of Sasquatch Hair!
Discovered by a Bigfoot researcher back in 2012 (along with 17-inch footprints) at the Manistee National Forest, Michigan, USA This single strand of reddish brown/black (4.5 cm) hair is alleged to have come from the elusive beast. You will note that I used the word “alleged” another of the hairs discovered has been sent to Dr. Jeff Meldrum of the Department of Anthropology at Idaho State University, for further study as at the time of writing this no results have been reported.

My intention was for this display to maintain the same look as the framed footprints, with a wooden frame and typed notes, but have it as a free standing display to show off the hair and allowing it to become a conversation piece, encouraging discussion and debate about the animal’s existence while science tries to prove it.

© Arfon Jones 2013. All images are copyrighted throughout the world.
Posted by Arfon Jones at 4:58 pm