I documented my visit to Bangor University’s natural history collection back in June. Well, I have since made several return trips as part of a small group of local artists that meet once a month at the museum to create art inspired by this magnificent collection. These pieces will be exhibited in the Brambell building as part of Bangor Science Festival on the 16th of March between 10:00am - 04:00pm.  Come along and see our work and take advantage of this opportunity to visit this amazing natural history collection for yourselves along with the University’s aquarium and microbiology labs!
The piece I have created for this exhibition depicts the first curator of the Zoology Collection Professor Philip J. White (1862- 1926). As I worked on this piece I was fortunate enough to learn a great deal about this interesting individual and his work, harking back to my Science Spotlight series produced in 2010. Most of the information was obtained from the Gwynedd Museum & Art Gallery and the Bangor University Archives so I have decided to present my ‘findings’ on here along with the portrait in the hope that it will be of interest. 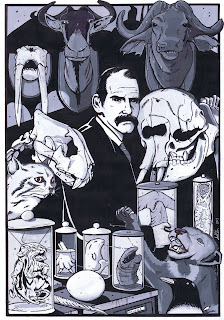 Professor Philip J. White (M.B. (Edin.), F.R.S.E., F.Z.S.) was Born in Aberdeen in 1862 Philip J White was a fellow of The Royal Society in Edinburgh and in 1889 was appointed lecturer at the agricultural department at The University College of North Wales (now called Bangor University) the first of its kind in Great Britain.
He was passionate about zoology and strived to educate others on the subject and was commended for his efforts in bringing his beloved subject to the public. In 1895 he lectured on Agricultural Zoology at Bangor, Caernarfon, Conwy and Pwllheli, sometimes to audiences of two hundred and fifty in a bid to raise awareness in agricultural science. He was well known for his research and promotion of sea fisheries in North Wales and his efforts for the inauguration of the Marine Biological station on Puffin Island. His collection of “fishes, shellfish and fishing gear” were shown, at the Yachting and Fisheries Exhibition, London in 1897, (and at the National Eiesteddfod in 1902 and 1906.) The Committee for the Promotion of Welsh Industries awarded him a diploma for his services to Welsh fisheries and the Caernarfon Eisteddfod awarded a grant towards his fisheries collection.
He was elevated to Professor of Zoology in1896 after the U.C.N.W. founded the Department of Zoology with White as its first head and sole member of staff.
J. Gwynn Williams in his book, 'The University College of North Wales: Foundations 1884 - 1927', explained, " The burdens upon him were very great, for in addition to the duties of the chair those of a skilled laboratory assistant were thrust upon him for many years…".

The University had a museum located on the second floor of the college buildings in the old Penrhyn Arms Hotel. Established in 1884 it contained a mixed subject collection devoted to the subjects being taught at the university at the time. In 1898 White was reported to have said that the foundation of a zoological collection in the U.C.N.W. museum (of which he was mentioned in minutes in 1891 as being ‘Vice Chairman of the Museum Committee’) had been a “matter of absorbing interest” to him.
His search for specimens was relentless and he amassed an impressive collection, “Specimens came from far and near, fishes from Ceylon, a sea-otter from Alaska, unspecified specimens in recognition of the department's services to the sponge fisheries of the Levant, insects brought by White himself from West Africa, a stag given by Edward VII and several gifts presented by G.W. Assheton Smith, including a fine Wapiti stag from his private zoo at Vaynol....” (The University College of North Wales: Foundations 1884 – 1927, J. Gwynn Williams). Skilled at dissection he regularly updated the collection.  It was documented that he once acquired the carcass of an elephant from a travelling circus and later left it to decay in the Bishop's Park until the bones were bare and dry, a method he often applied. When the new University buildings were built in Upper Bangor in 1911, they included a purpose built space for the Museum, next to the Library. It was still a general museum, containing historical and scientific material when White was appointed its first curator in 1913, then when the museum was rearranged in 1925, and collections separated, he became curator of the Zoology Collection until his death in 1926.

His obituary published in the ‘Bangorian’ in 1930 by friend and colleague the entomologist Dr. W. Maldwyn Davies wrote that White had a keen desire to create interest, “he deemed it a privilege to impart to others his knowledge, interest and enthusiasm for the subject he was so enthralled. He had a gift of thinking simply and the art of writing so that all who wished might understand.” He described White as having a “congenial manner” with a great affection for his students. Apart from zoology he was well aquatinted with classic literature and scripture as well. Davies elaborated, “reluctantly he would pardon unfamiliarity with the derivation of zoological nomenclature, but there appeared no forgiveness for ignorance in Bible quotation”. Adding that, “His passionate outbursts and apparent despair when his students were found wanting will ever be remembered. Such were not resented; on the contrary, they incited a deep sense of regret and subsequently that deep respect and admiration for the devotion to zoology so characteristic of Dr. White”

That was Professor Philip J. White. Researching the man and his work has added a new dimension to the museum for me. Now when I visit I am reminded of what Dr. W. Maldwyn Davies said, “It appeared his life’s motif to bequeath to his very own department a museum worthy of the name of Philip White. It now stands a magnificent memorial to a life devoted to zoology and its department at Bangor. Posterity alone can appreciate its full worth.”

My sincere thanks to,
Dr Rosanna L.Robinson at the College Of Natural Science, Bangor
Esther Elin Roberts Curator at the Gwynedd Museum & Art Gallery, Bangor
Lynette Williams at the Bangor University Archives

© Arfon Jones 2013. All images are copyrighted throughout the world.
Posted by Arfon Jones at 11:49 pm