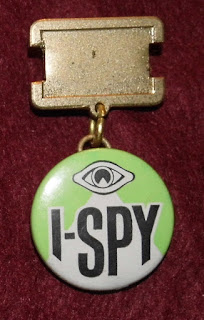 Time for some more medals...
The I-SPY spotters' guides were a series of books first created in 1949 and written for the children of the British Isles during 1950s and 1960s by an apparent Red Indian chief called Big Chief I-Spy. But Big Chief I-Spy was in fact one Mr. Charles Warrell (1889 -1995) a former head master who devised these books as a way of keeping children entertained and stimulated on long car journeys. It was a simple enough premise, children would spot the objects listed in the themed books, record the event (gaining points) and then once the book was completed, they would send the book to Big Chief I-SPY (witnessed by a parent or teacher) for a feather and entry to the order of merit. The children participating in the game were known as The I-SPY Tribe. The books were so well recieved that by 1953 the I-SPY Tribe had half a million members and a column in the Daily Mail where completed entries were mentioned by name. When Warrell retired in 1956, Arnold Cawthrow became the second Big Chief, and served in this role until 1978 when Big Chief, Robin Tucek stepped in for a short time before Professor David Bellamy carried the torch as Big Chief throught the 1980's (where I came in) until Michelin Travel Publications acquired and published the series itself from 1991 through 2002 before relaunching the series again in 2009. This particular medal dates from around 1961, and would have been acquired by a 'redskin' that would have decoded a special message in The Daily Mail with the aid of their membership code book.
© Arfon Jones 2017. All images are copyrighted throughout the world.
Posted by Arfon Jones at 6:34 pm