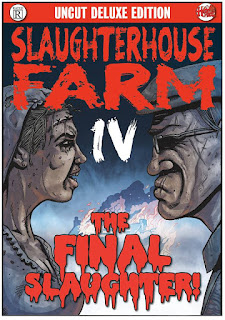 Following on from the successful Kickstarter campaign the fourth and final issue of Slaughterhouse Farm is out now! Just like the previous three issues this was written by AJ Ballard and Matt Warner, lettered by Nikki Foxrobot and illustrated by yours truly. After four years this grizzly tale of a trip to Snowdonia going horribly awry comes to a conclusion and as I mentioned before the campaign achieved its target goal after only a week proving how much of a hit this title has been with readers of the independent comic scene. So, don't delay order your copy today through their website or pick up an issue at one of Hellbound Media’s stalls positioned at numerous comic conventions across the country. Already read it? Let them know what you thought either on their Facebook page or Twitter or post a comment and I'll pass it on as I would love to know what you made of it.

© Arfon Jones 2017. All images are copyrighted throughout the world.
Posted by Arfon Jones at 2:15 pm