As I said in my previous post a technical fault had arisen resulting in two posts disappearing 'Happy Birthday RolandRat!' posted back on the 12th of March 2014 and 'Arfon’s Sponsored Friday the 13th Movie Marathon: CONCLUSION' originally posted on the 15th of November 2015 fortunately I am able upload them again but unfortunately it created some dead links and ruined the continuity... anyway, here it is again! 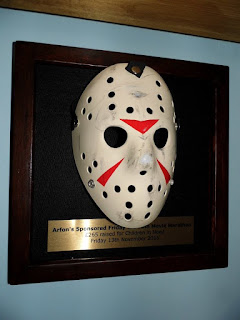 Well I did it! I completed my Sponsored ‘Friday the 13th Movie Marathon’ challenge and it was a great success I watched all 12 Friday the 13th movies back to back from 9:am Friday 13th to 5:30am Saturday 14th It took 20 and a half-hours to complete raising a total of £265 for Children in Need and every penny goes towards helping disadvantaged children across the UK! My sincere thanks to everyone that sponsored me thank you for your generosity! Thanks  to everyone that helped spread the word and posted encouraging messages throughout the day!  And a big thank you to my daughter for keeping out of the room and getting me a pizza and Mrs Jones for bringing me cakes from her Children in Need bake sale (of which they raised £200 for Children in Need!). As promised, I posted photographs of my progress during the day on Instagram.


I stopped briefly during part 2 to be interviewed about the event by Brandon Williams for the Jason Mohammad late morning show on BBC Radio Wales I’ve uploaded the clip of it to my Youtube page should you be interested in hearing such things... If reading it is more your “bag” here's the interview transcribed for your convenience.

Introduction to the link by Jason Mohammad and Eggsy rather confused and distracted as they were dressing up in different items of fancy dress each hour of the show.)
Eggsy: “I love horror movies, absolutely,love them.”
Jason Mohammad: “ Halloween?”
Eggsy: “Great film!”
Jason: ”Seen them all?”
Eggsy:” Errrr... Yeah, Halloween 3 is one of my favourites.”
Jason:”It's a great film, the reason I ask Eggsy because it doesn't matter how much you raise every penny counts and one horror movie fan in the Llŷn Peninsula is as we speak in the middle of a fund raising movie marathon to give you a clue what its all about its a scary bloke called Jason... Lets go over live to our reporter Brandon, good morning Brandon.”
Brandon Williams:” Good morning Jason, as if one scary bloke called Jason wasn't enough to cope with, the man I am with now has to deal with twelve of them back to back! I'm with Arfon Jones at his home in Nefyn and he's just over two and a half hours into his movie marathon and the films he's watching, Well if the evil Jason character wasn't enough just think of today's date, Friday the 13th. Arfon is watching all twelve episodes of the Friday the 13th movie franchise back to back you might be able to hear it in the background. He started at nine this morning and is just in the middle of part two. Not everyone's cup of tea Arfon. Certainly not mine so how did you come up with this idea?”
Arfon Jones:” It's an idea I have had for some time and then when I found out that Children in Need was on a Friday the 13th I thought this would be my excuse to do it. So that's where I got the idea.”
Brandon:” Its coming up to midday now, when will you finish this marathon?”
Arfon: ”I've worked it out at around three o'clock in the morning... there abouts.”
Brandon: ”I trust you have enough popcorn?
Arfon:”Absolutely!”
Brandon: ”Now you are a horror fan but you haven't seen all of these. Based on what you've seen so far is this going to be torture? Or are you actually enjoying it?”
Arfon: ”I'm sure I will start to feel the strain at around eleven o'clock tonight but so far so good.”
Brandon: "And your wife and daughter they are out all day to leave you alone to your marathon, do they think you are mad?”
Arfon: ”They have always thought I'm mad, I suppose this is just another example of the madness they have to endure.”
Brandon: ”Your daughter is only just thirteen so you will have to keep her out of the way of this one?
Arfon: ” She's had strict instructions to keep out of the room for the rest of the day!”
Brandon: ”And the burning question here is how much you have actually raised so far?
Arfon: ”Just under £250 at the moment but hopefully we will get a lot more at the end of the day!
Brandon: ”You might actually go for the 24 hour mark as well, you have a documentary to watch at the end.”
Arfon: ” Assuming I am still awake at that point I might just push the envelope and try and make 24 hours with it.
Brandon: ” Well, nearly £250 that is brilliant Arfon, really fantastic- well done. You've got a lot a long way to go, so I will let you get back to the film and we will hand back to the other slightly less sinister Jason in the studio.”
Jason Mohammad: ” Should just say as well, You know quite a lot about horror movies as well, there is a big difference between Friday the 13th and Halloween!”
Eggsy: ” Yes that was our producer's fault!”
Jason: “Never blame it on the producer!”
Eggsy: “Yeah, Halloween, completely different to Friday the 13th a massive Friday the 13th marathon going on there. There is a point when those films to tell him... HE'S GOING TO GO ON UNTIL THREE OCLOCK IN THE MORING!”
Jason: ”yeah!”
Eggsy: “That's unbelievable! I don't think I could do it- I mean I like a good horror film but with the Friday the 13th movies I think at one point he fights Freddy Kruger, I think that by the time Freddy Kruger comes in...”
Jason: ”Does he make an appearance?
Eggsy: “yeah, I think its 'Freddy vs, Jason' and its just like, come on! That's just... then there's one when Jason is in space! I think there is one set in Bradford or something? They were just running out of ideas quite badly at this point!”