Interesting things that I have seen this year (since posting the 199th post) New Years blog post, thingy 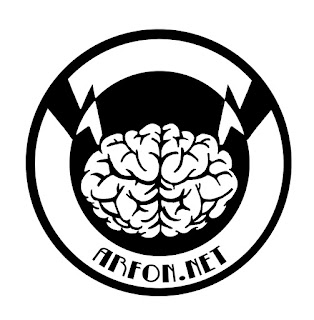 Hello. Did you have a good Christmas? Jolly good! Well, 2016 is upon us- and 2015 (the future) is a rapidly coming to a close, and so its time to upload the last post of the year devoted to recounting the previous twelve months. As ever I’ve been busy in my studio working on several projects, publications and exhibitions (but this has nothing on what’s coming in 2016!) But what shall I close on though? I could write a retrospective of all my projects again or simply write keywords such as Doctor Who, Arfon, clockwork, fish, cursed tree, rivet, David Bellamy, potato, slaughterhouse, Jack the Ripper, Tempest and Blue Peter. Naturally I must acknowledge the sad passing of many talented people lost to us this year such as Leonard Nimoy, Yvonne Craig, Patrick Macnee, Sir Christopher Lee, Grace Lee Whitney, Keith Harris, Bob Symes. Wes Craven, "Rowdy" Roddy Piper, Gunnar Hansen, Rod Taylor, Rex Reason, Claire Gordon, George Cole, Cilla Black, Warren Mitchell, Terry Pratchett, Dean Jones, Cynthia Payne, Shirley Stelfox, Carol Doda, Omar Sharif, BB King, Sam Simon, Anne Kirkbride, Jackie Collins, Alex Rocco,Cecil,  Robert Loggia, Blaze Starr, Nicholas Smith, Anthony Read, Maureen O'Hara, Peter Baldwin, Hugh Scully, Stephen Lewis, Susan Sheridan, Pamela Cundell, Michael C. Gross, The Pizz and Lemmy. (Much like last year’s list it reflects people that ‘inspired’ me personally in some way or their work I have enjoyed over the years). I could name drop and tell you that I had Tweets from Roland Rat, Gaz Topp, Andy Peters and Pat Sharp this year and that I also had the pleasure of meeting Stuart Ashen, Richard Wilson and Buzz Aldrin in person but then I had another idea. Seeing as the 199th blog post that documented interesting things that I had seen since starting the blog had been so popular I thought I would make another! So think of this as a ‘interesting things that I have seen this year (since posting the 199th post) New Years blog post, thingy!’ 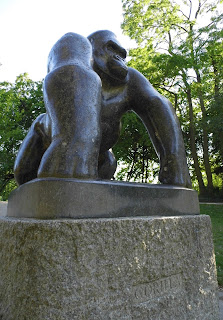 Guy the Gorilla, Crystal Palace Park.
I intend to follow up my ‘Prehistoric Pining’blog post about 'Dinosaur World' Colwyn Bay with one devoted to the Crystal Place dinosaurs (incidentally check out this site and see the amazing work that Friends of Crystal Palace Dinosaurs are doing in restoring these magnificent Victorian sculptures to their former glory). But today I would like to direct you to a relatively new statue, since 1961 a marble statue of a gorilla has stood in Crystal Palace Park. Sculpted by David Wynne OBE (1926 –2014) the Gorilla in question was the late Guy the Gorilla (1946–1978) London Zoo's famous resident western lowland gorilla and up to his death he was one of the Zoo’s main stars. Although Guy can still be seen by the public at the Natural History Museum he has been commemorated by two statues in London, one bronze statue by William Timym (the artist responsible for Blue Peter's Petra the dog statue) at London Zoo and this one at Crystal Palace Park. 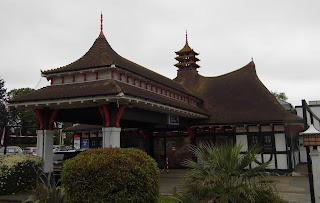 The Chinese Garage, Beckenham.
This former petrol station situated in Beckenham in the London Borough of Bromley was built in 1928 to a design by Edmund B. Clarke in the style of a Japanese pagoda built purely on a whim! Although actually called Langley Park Garage this Grade II listed building soon became know to the locals as “The Chinese Garage”. Now a Peugeot car dealership they no longer sell petrol and it was voted the most unusual garage in England in 2001. 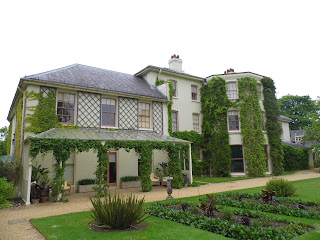 Down House, Downe
This grade I Listed building is former family home of world-renowned naturalist and hero of mine Charles Darwin. It was in this very house and garden that Darwin worked on his theories of evolution by natural selection. English Heritage acquired Down House in 1996 and is open daily to the public and it was truly inspiring standing in his actual study, beautifully restored with original furniture his writing board and books. We happened to visit on a quiet day and had a pleasant stroll around the garden looking for pinecones (souvenirs) stopping only for conveniently placed benches to take it all in. If you haven’t been yet, make the effort. 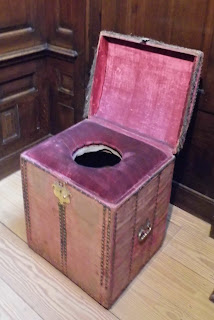 William III Close-Stool, Hampton Court
I shall assume you all know what this was used for… C.1650 and located in William III’s State Apartments we find King William III (1650–1702)’s ‘other’ throne complete with red velvet and brass fittings. What was once a private facility used by king and attended to by his senior courtier known as “the Groom of the Stool” is now gawked at by smirking tourists. 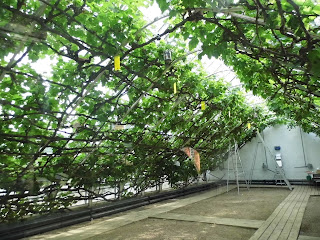 The Great Vine, Hampton Court
The Great Vine at Hampton Court is over 240 years old and according to Guinness World Records has a circumference of 3.8m (12ft 5in) and branches typically measuring up to 33m (108 ft) long. The longest measures 75m (246ft) long as of January 2005. The Vine fills a purpose-built glasshouse erected around the original 1900’s structure and its roots occupy the outside surrounding area. Is still bears fruit too, the grapes are ripe after August Bank Holiday and are sold during the first three weeks of September (providing incentive to go back!).

There you go, I hope those were of interest! A very Happy New Year to all my friends out there old and new, a special ‘shout out’ to Mim, Kid, TwoHeadedBoy and Moira for regularly commenting on my posts/assuring me that at least 4 people are actually reading these posts (and I seriously recommend that you visit their blogs too! links provided). My sincerest of thanks to all that supported my work over the past year be it a commission or kind word (or both!) I look forward to catching up with you all in 2016!