December is here and the annual tradition of the office Christmas party seems to be in full swing with photos from ‘office do’s’ trickling onto social networking sites but what if you are self-employed like me? I worked hard during what has been a productive year, yet because I work alone and from home I seem to miss out on these big (potentially tax-free) knees-ups!  Apparently it’s widely regarded to be crucial for staff morale so why cant I reward this single worker with one? Why can’t I let my hair down at the company’s expense? Well this year I decided to do something about it so I treated this lone workforce worker to the first arfon.net Christmas staff party! 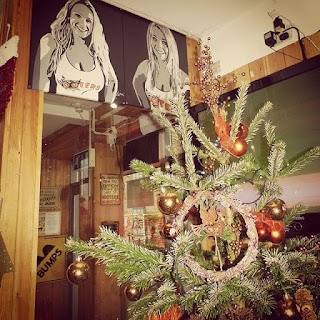 Traditionally these parties are held in the office/work place but I don’t have a stationary cupboard in the studio and the photocopying machine is under my desk and inaccessible for seasonal shenanigans so the decision to go out for a meal was opted for instead. A Christmas party for one might seem strange but it really makes prefect sense, no minibuses to arrange and no quarrels or ill feeling over the location selected. That in mind I nominated myself to choose the location for the first ever arfon.net festive shindig and the location I selected was Hooters of Nottingham. The “Delightfully tacky, yet unrefined” Hooters is an American restaurant chain that first opened its doors in Florida in 1983 and have since branched out (and at the time of writing this) have 430 restaurants located in 28 countries. Hooters of Nottingham are located at the Hicking Building on London Road and are the only Hooters in the UK. When it opened in 1996 a further 36 UK Hooters had been planed but only two opened  (Bristol and Cardiff) only to close not long after, meanwhile Hooters of Nottingham continues to thrive. Best known for their waiting staff comprising (primarily) of attractive women, known as ‘Hooter Girls’ supporting a uniform of a white vest top with Hootie the Owl logo on the front and short orange runner's shorts. 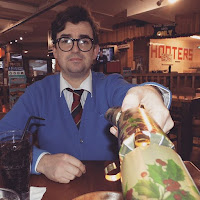 Perhaps not for everyone the Hooters franchise is often under attack from various groups, a shame really as Hooters pride themselves on making the restaurant accessible to everyone and to not discriminate. Kids eat free on a Sundays and they offer a 10% discount to those in the armed forces and the NHS. Speaking of discrimination many companies restrict their functions to employees only or make spouse or partners pay for their meals and drinks. Not this one! A warm welcome was also extended to this employee’s "plus one"! 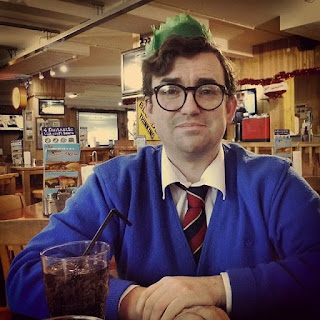 Having arrived, we were shown to our table by one of their lovely, Hooters girls, the wood panelled premises had been appropriately decked out in festive trimmings providing a delicate balance of Hooters memorabilia and Christmas decorations. The music was a mix of classic tracks both Christmas and otherwise and as we awaited our meal a Christmas cracker was pulled which contained one plastic frog, a joke (“what does a clock do when it’s hungry? It goes back 4 seconds”) and one paper hat of which I wore. Our food arrived, Hooter’s speciality is chicken wings so I had the 10 piece boneless wings served with Hooters own recipe spicy sauce and the BBQ glazed rib and curly fries for my plus one. Although not exactly festive they do however offer 2 giant mince pies served with warm whipped cream and butterscotch sauce! Food aside it was time to engage in the Secret Santa present-giving ritual. Wikipedia defines Secret Santa as, “A Western Christmas tradition in which members of a group or community are randomly assigned a person to whom they anonymously give a gift.” Colleagues that don’t know each other terribly well buy each other mismatched gifts. Another win-win situation for me I know exactly what I like! A new Fred Flinstone 'Wacky Wobbler' for my collection! 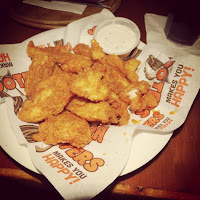 So that was it, the first arfon.net Christmas staff party where a good time was had by all, the food was delicious and the staff there were great! Apparently these workplace celebrations help motivate employees by encouraging hard work and offer a break from monotony and make them more focused and better able to tackle projects when they return to work. Lets see if it works, many thanks to everyone at Hooters of Nottingham for the warm welcome and for making my first staff party, a great one! Merry Christmas! 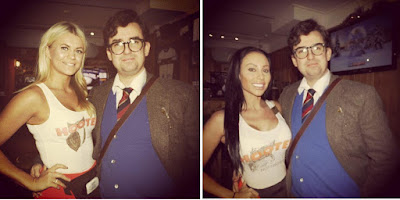