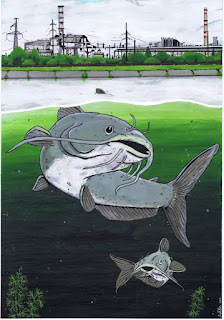 Around 10 years ago I volunteered my services to a charitable group by offering free artwork for their worthwhile cause only to have my offer declined, then having criticised my style they approached an ‘established’ artist who gave them a half hearted computer generated image. To say that I was disappointed would be putting it mildly, suffice to say it made me wary of offering ‘free art’ to charity. HOWEVER, I have been deeply moved by the work and efforts done by the Chernobyl Children's Project (UK) a charity that provides support for the children and their families in Belarus, most affected by the Chernobyl disaster.  Their hard work and dedication inspired me to want to help in some way, so I painted ‘The Cooling Pond’ to mark the 25th anniversary of the Chernobyl disaster back in 2011. It featured in the Voices from Chernobyl art exhibition held in Los Angeles and now I am donating it to the Chernobyl Children's Project (UK) charity with 100% of the proceeds going to this wonderful charity. Helping children with disabilities, cancer or diabetes and delivering humanitarian aid to them and their families. It is now listed on ebay, so please check out the link and place a bid on it, the sale ends on the second of December so lets hope we raise a great sum in time for Christmas!

© Arfon Jones 2012. All images are copyrighted throughout the world.
Posted by Arfon Jones at 2:54 pm