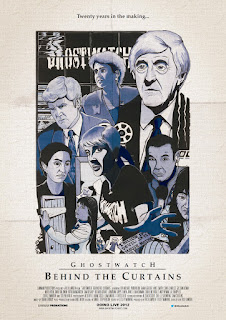 Hallowe'en is here again and as usual it’s a busy time in the studio! I am just adding the final touches to ‘Slaughter House Farm’ my latest collaboration with Hellbound Media before changing into my best suit for tonight’s ‘Zombies from Ireland’ premiere. An exclusive viewing for cast and crew that promises to be a evening of red carpet and glamour complete with television crews and media!
So, I shall update this blog as the day progresses!

BUT, before I do anything else “Happy 20th Anniversary Ghostwatch!” It simply wouldn’t be Halloween without Ghostwatch ah, twenty years since this chilling drama etched itself on to my impressionable little psyche! Speaking of which the upcoming retrospective documentary Ghostwatch: Behind the Curtains should hopefully be announcing it’s releases date soon so be sure to check in for updates on that. If you read my ramblings on a regular basis you will know that I have been watching this project for many years with great interest. So I am really looking forward to seeing the finished documentary which I am privileged to be associated with by means of the poster art I produced for them.
Don’t forget to join the 2012 National Séance! A chance to celebrate the twentieth anniversary of Ghostwatch's first broadcast by taking part in a 'live' simultaneous repeat viewing! All you need is a Ghostwatch dvd and a Twitter account…Set your Ghostwatch dvd to start at 21:25 (the time it originally aired in 1992) and then tweet comments and share thoughts on the proceedings as it plays. I have been advised that you should provide #Ghostwatch at the end of every Tweet for maximum efficiency. Until then please check out the Ghostwatch: Behind the Curtains teaser trailer! 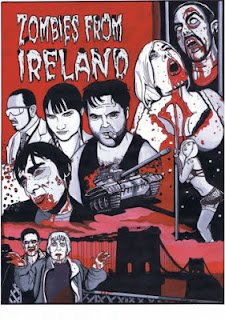 Hallowe'en  2012 part 2: All Hallows' Eve –ning out
Right, back from the premiere and what a great evening we had, It was a delight to be amongst such excitement and enthusiasm, as we ‘mingled’ I would spot the occasional zombie that I had featured on the poster. It was wonderful to be able to catch up with people that I had met at the bridge scene last year and others that I had not met before but wanted to tell me how much they liked the artwork! Everyone was hyped and eager to see the film and once we had taken our seats, director Ryan Kift made a very short but sweet speech before declaring “roll ‘em!”
As I am not actually a film critic and I have no desire to give anything away I shall avoid any details regarding the actual film itself BUT I will say I thoroughly enjoyed it! As a fan of the genre and a local to this area I found it to be terrific fun, it has a distinctive style and a lot of heart to it and I recommend you check it out when it becomes available for public viewing. I extend my heartiest congratulations to Ryan and Sian, their hard work and devotion has paid off and I look forward to seeing what the future brings!

Having returned home with scarcely an hour of Halloween left I took my bow tie off, ate some ‘Terror Eyes’ (that I had bought at the bar of all places!) and ended the evening watching Ghostwatch… Back to work tomorrow! Happy Hallowe'en!

© Arfon Jones 2012. All images are copyrighted throughout the world.
Posted by Arfon Jones at 12:20 am