Boffin Board Game Bonanza! 1:David Bellamy’s ‘Save The World!’ 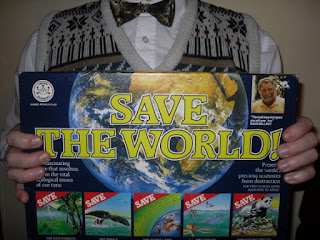 As we approach ever closer to Christmas and the days grow shorter this means only one thing… BOARD GAMES! So, I thought I would create a mini feature for the blog, which allows me the opportunity to share some rather obscure board games with you. These games are from my own collection they both appeal to my sense of design and nostalgia and celebrate the ‘tv boffin’. I shall highlight a few on here in the hopes that it will both fascinate and encourage you to seek out these obscure, lost games and enjoy them for yourselves!
Today I shall start with David Bellamy’s ‘Save The World!’ game, Produced by Crown & Andrews in 1989 this game was endorsed by botanist/conservationist David Bellamy who informs us that. “Save the World is the most important game you will ever play, not just for fun but in real life, your real life.” (They rather naughtily change ‘play’ to ‘buy’ on the cover of the box). Growing up in the 1980’s I was and still am a fan of David Bellamy and his crusade so I was intrigued by this game. Clearly created to educate families on environmental issues when the UK started to take an interested in such things (ah, I remember it well). David Bellamy elaborates on the lessons that can be learnt on the information sheet, “The more we all know and understand about the problems and what we- yes little, old or young, you and me- can do, the easier it will be to put the earth back in working order. I have learned a lot helping to prepare all the questions. You may not agree with all the answers so before you start to play Save the World appoint an ombudsperson, someone who will have the final say. Hoorays and boos are all right- the house plants need the carbon dioxide you breath out. But no hot air, remember the greenhouse effect.” 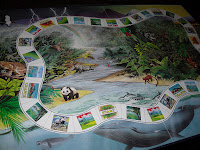 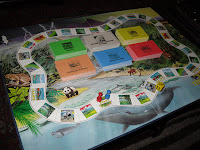 The game can be played by up to six players and requires the players to move around the board and answer questions relevant to the category decided by the square they land on. Answer the question correctly and you win a token tile the first to collect all five tokens, wins!
The game consists of a wooden dice and six coloured pawns with a game board decorated with various animal species and their corresponding environments along with squares labelled by the categories that match up to the question cards.  The categories are Atmosphere, Environment & People, Forests, Rivers & Oceans, Landscape & Plants, Wildlife and Chance.
The questions on the cards were complied by the Conservation Society and edited by David Bellamy and David Shreeve and they all relate to several environmental concerns, the information sheet points out “the answers are those decided by a panel of enthusiasts at the time of publication. Have a great game, learn a lot and help Save the World. There is no more time to waste in argument.” It also encourages the players to seek out further information from any of the organisations mentioned on the cards. 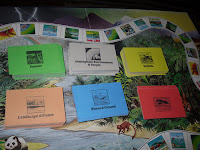 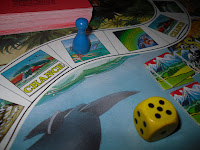 We have played this a few times now and found it to be a fun little game that doesn’t require much of your time think of it as a sort of environmental Trivial Pursuit. Although I’m not entirely sure that its suitable for the age suggested (9 +) as some of the questions relate to statistics, (which also probably dates the game somewhat) I am sure that they can be adapted if needed. I found it endearing that the product was reportedly made from recycled board and paper but the thing that struck me as we played was the genuine attempt to educate by means of fun with its mixture of scientific questions and challenges. All involved must have hoped that children would learn about these important issues while being entertained seeing their parents chirp like a bird or try and spell BREAM backwards! Whether it worked or not remains to be seen. Some of the methods may have changed since the 80’s but the mission remains the same so check it out! If not for the entertainment or nostalgic value but for the environment you help preserve by saving unwanted games from landfill sites.

© Arfon Jones 2012. All images are copyrighted throughout the world.
Posted by Arfon Jones at 5:28 pm

Email ThisBlogThis!Share to TwitterShare to FacebookShare to Pinterest
Labels: Boffin Board Game Bonanza!