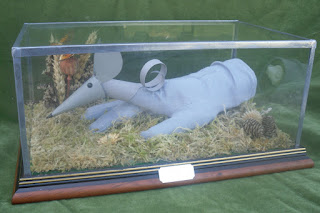 Getting to grips with this new look Blogger has caused a slight Blogger Blockage! I’m getting the hang of it now so hold on to your hats you are about to witness a deluge of threads!
Right, You will recall that last year I had a Womble (Womblus Wimbledon Vulgaris) stuffed, mounted and displayed. Not long after, I added another creature to my collection of wonderments and atrocities Mus Digitatus more commonly known as the FingerMouse.  Another creature I remember fondly from my childhood that I simply had to have in my possession!  Still trying to retain that Victorian taxidermy look he stands in a glass case along with some plants and a butterfly. Clues as to how this animal came to occupy the glass case can be better explained when observed through the right side of the case… 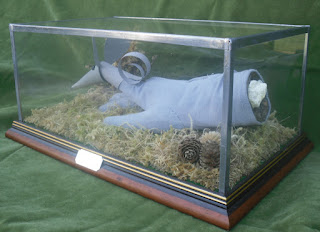 Additional: I have had this specimen in my collection for several months but decided to keep it under wraps until he could be unveiled at this year’s Waltz on the Wye event. I was packing him for transporting to said event and discovered that a money spider had also inhabited the case all this time! He was carefully removed and placed in a more suited location but his delicate web was left undisturbed.

*UPDATE* 03/01/2013 - "Yoffy" himself Mr. Rick Jones approves! He sent me a delightfully encouraging e-mail and then shared with his Twitter followers.

© Arfon Jones 2012. All images are copyrighted throughout the world
Posted by Arfon Jones at 11:46 pm