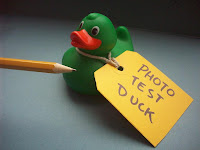 The idea I had back in 2002 was a simple one. 100 plastic bath ducks complete with a web site information dropped into the sea where they would be carried by the current and would eventually be washed ashore at a different point on the globe. Anyone that discovers a ‘scout duck’ would then log on to the address provided were they would learn of my work and then ‘register’ their duck on the web site. I would have a business card with a difference, one that grants me world-wide adverting. “Why a duck?” I was asked well. Aside from being buoyant a bath duck is also ascetically pleasing guaranteeing that a member of the public would notice it on a beach pick it up and take it home with them a sure way to prevent polluting the beach it was washed up on. Two ferrying companies were contacted and asked if they would participate in the experiment allowing the use of their vessels to introduce the ducks to the ocean. Both declined, expressed concerns about “dumping” plastic into the ocean (although, they would not object if I were to throw a bottle) I pointed out that a member of the public would pick up a duck. They didn’t want to know. The experiment was put on hold.

2009, Operation: Bath Duck was still an idea on paper. On reflection I had grown concerned of the environmental risks poised to marine life, which may try to eat the ducks before they made it ashore. Having reviewed the experiment I was confidant that that a bath duck would be taken home if located so I decided that the ‘scout ducks’ would instead be strategically placed around the globe. These were ‘business cards’ after all, and business cards are usually left or given to another! Now living in an age were we all have cameras in our phones and photos can be uploaded to computers I decided that having discovered the duck the new owner could also submit a photograph of the duck’s new home when registering it. Operation: Bath Duck was in effect! 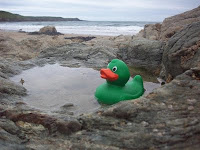 The success of the experiment depended largely on the internet, I decided to use the social networking sites and invite people to vote for the most eye pleasing colour for a bath duck, this being an important factor as they needed to be noticed by a member of the public. The colours were ‘classic yellow’ or ‘green’ interestingly the winning colour was green. Scout Ducks were to be green wearing a tag with the experiment written out on one side, contact details on the other with a serial number located on the base.

That was 2 months ago, Operation Bath Duck is in effect. 4 Scout Ducks have reported back. Images are being uploaded to the gallery and a group has been set up on facebook allowing its members the opportunity to monitor progress, and upload other photos of their scout ducks adventures.

© Arfon Jones 2009. All images are copyrighted throughout the world
Posted by Arfon Jones at 9:15 am