Cerebration and Celebration: Off to the Asylum! 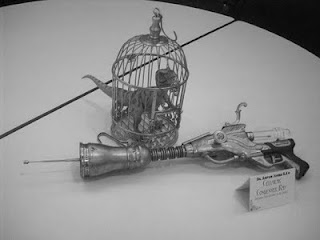 Organised, by the Victorian Steampunk Society The Asylum was the first Steampunk Convivial in the United Kingdom. Held at the Lawn in Lincoln a former psychiatric hospital opened in 1820 the event promised an entertaining weekend Steampunk-ness and they certainly kept their word!
On the Saturday morning I unveiled my latest invention and entry for the grand exhibition’s contraptions contest ‘The Cellular Condenser Ray’ specially constructed to help the naturalist to decrease a dinosaur in its tracks! Once the animal has been reduced it can be contained in a brass cage (also included) assuring high number of live specimen at a fraction of the storage space. The gun seemed to go down well (helped partly by the caged demonstration Tyrannosaurus Rex).

As the public viewed the inventions Beth and I attended two fascinating lectures presented by Physicist/ Astrophysicist Dr Emma J King PhD entitled ‘Electromagnetics: The Science and Mystery of Electromagnetism’ and ‘Only Forward: The Physics of Time Travel’. We followed this with a spot of lunch as we watched other attendees play croquet. Having perused the Bazaar Eclectica we then ventured outside and discovered The Sir Joseph Banks Conservatory named in honour of the great British explorer/ naturalist. A truly wonderful place to visit that offered us an excellent opportunity to photograph our costumes in a tropical environment! A cup of tea beneath the palms proceeded with a stroll around the green and then a rest under a Horse-Chestnut tree. We managed to tear ourselves away and enter the hall for the costume competition I did not envy the judges, as they were all amazing. 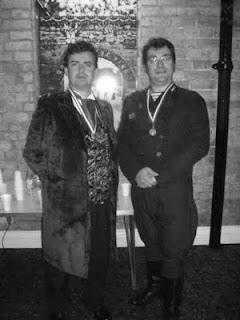 We all reconvened at 7:30pm to attend the Empire Ball. Everyone dressed to impress attractive ladies wearing beautifully made dresses and ball gowns accompanied by gentlemen wearing equally impressive attire as the writer Robert Rankin later commented that we were the best dressed people in the country! Greeted by the organisers of the event and we then took our seats for an evening of live entertainment…and a few glasses of wine. The winners of the Contraptions Contest were announced and I was awarded the Brunel award for Ingenuity (of which I proudly excepted!) I wore my medal with pride as I waltzed with my beloved to the music of Ghostfire before the night drew to a close. And so ended a truly spectacular weekend of art, science and technology! Surrounded by likeminded folk, history and creativity! Met lovely, interesting people saw amazing works.


© Arfon Jones 2009. All images are copyrighted throughout the world
Posted by Arfon Jones at 8:57 pm