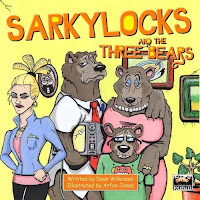 This was a very exciting week as we saw the releases of ‘Sarkylocks and the Three Bears’ written by multi-award winning comedy writer Dean Wilkinson and illustrated by yours truly. It’s always gratifying to see ones work in print and this was no exception. Sarkylocks and the Three Bears is the first title in 21st Century Fairy Folktales series. Short, illustrated, comedy books aimed at 9+ readers. They are modern re-workings of traditional tales, each with a social message.
The book teaches us that ‘It’d be a very boring world if we were all exactly the same, and one young girl finds that out in this hilarious new take on the classic fairy tale. Sarkylocks comes to realise that it’s wrong to lower someone’s self esteem by making jokes about them just because they’re different to what you think people should be like. Sarky learns that differences are to be celebrated, and you yourself will feel a lot happier and more confident if you make someone else feel the same way. One nice word is worth a million nasty ones. The book can be enjoyed at home or in a school environment as each story has it's own set of free lesson plans and lesson fillers for teachers on-line.

Dean Wilkinson has a long successful career writing for British television comedy he was the creator and writer of CBBC TV’s Bad Penny and the smash hit sketch show Stupid. His writing credits include The Big Breakfast, Zig & Zag, Byker Grove, Timmy Towers, Comic Relief, Harry Hill’s Shark Infested Custard and Planet Sketch to name but a few. He was Ant and Dec’s writer and scripted the multi award winning SMTV Live and Chums and he also wrote material and Stephen Fry’s scripts for the Sony game LittleBigPlanet. For more information about the book and to order your copy please visit wilkinsonpress the book is also available through Amazon. 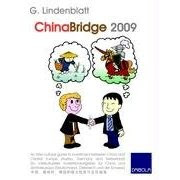 ChinaBridge 2009 by Lindenblatt, Gunnar was also released this month a fascinating inter-cultural guide to investment between China and Central Europe (Austria, Germany and Switzerland) As the book explains that
China is the “workbench” of Europe. Following the big industrial enterprises, now more and more medium-sized companies are locating into China. For years, the Chinese economy has been enjoying annual double-digit growth rates. Conversely, Chinese business people are dealing more confidently in the European market and introducing their own brands. The question remains for those yet to make such a leap weather to conduct a business venture across the divide or not? The first part of this book answers this question and gives specific instructions, not only regarding economic issues but also covering cultural differences, providing knowledge which may be essential to the success of such a venture. Examples of successes and failures in China/European business relationships are found through the publication with many key analyses of the positive and negative aspects and experiences covered. The second part lists companies and institutions, which have already successfully finished the “bridge building” between East and West, from banks to export companies to suppliers.
Also available through Amazon.

Ancient Lights By Sir Patrick Moore
Written by legendary Astronomer, National treasure and all round gentleman Sir Patrick Moore when he was just twenty years old but remained unpublished until now! A wonderful adventure yarn set in a bygone era. Published by STAR-Distribution only 500 were printed each serially numbered not available in the shops only available through STAR-Distribution


© Arfon Jones 2009. All images are copyrighted throughout the world
Posted by Arfon Jones at 11:26 am