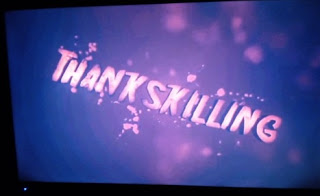 Here we go again- another Holiday themed film that centres around an American holiday I wouldn’t normally celebrate... either way, Happy Thanksgiving to all of you out there that do celebrate it!
So, ThanksKilling the 2008 horror/ black comedy shot on a budget of $3,500 in the summer of 2007, and released on DVD in 2009. What can I say? ...When I set myself this challenge at the start of the year I drew up a rough list of movies that would feature and this one made the list right away, although I had never seen it I knew of its existence and two factors, 1) that it was generally regarded as a terrible movie and 2) It featured a wise cracking killer turkey- So with those two factors in mind watching it was inevitable and now having just finished watching it I can now confirm that it was indeed a terrible movie and yes, it does feature a wise cracking killer turkey, A possessed, wise cracking turkey in fact, that terrorizes five college students during Thanksgiving break repeating what he had done at the very first Thanksgiving in 1621.
Now, I try not to be over critical of any movie, I’ve never made one- and I know it’s not easy to do and commend anyone that accomplishes it and I try to look deeper, this one was indeed a challenge and to be honest, my interest waned right after the first pilgrim died before the opening credits, although the film did get one chuckle out of me. By all accounts it was written by the director Jordan Downey, Brad Schulz, Tony Wilson, Grant Yaffee, and Kevin Stewart, a group of friends, and this is apparent- and I will go out on a limb here and assume that they are fans of South Park? so let’s leave it at that. The film has garnered a cult following, believed (in part) to it being one of the movies available for streaming during Netflix’s early days and there is a sequel, ThanksKilling 3... Perhaps I will do that one if I ever do another of these challenges but let’s finish this one first!
So join me next time for Friday the 13th... wait! What?