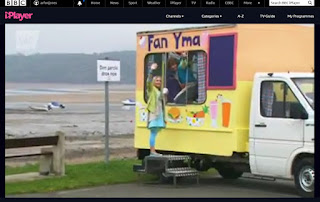 Back in 2009 I was hired to help out with the production of a Welsh language children’s television series entitled Cei Bach it’s been nine years so I’m assuming that they won’t mind me mentioning it now (If I’m wrong S4C please let me know) Cei Bach centred around Prys the village policeman and his wife Mari who ran a B&B on the sea front along with various other characters which made up their community, described as the 'Welsh Balamory' the show was filmed around the village of Borth-y-Gest (one mile outside Porthmadog) and yours truly was hired to decorate a snack van which featured in the series and paint a donkey for a pin the tail on the donkey competition which featured in a village fate. 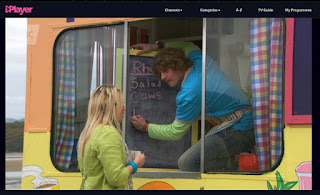 I haven’t been able to find the village fate episode online but here are some random shots of the van which I adorned with various snacks. Look out for them on iPlayer or follow this link to Cyw (A Welsh language Children's television block on S4C) to watch some episodes. Fear not non Welsh speakers I understand English subtitles are available!