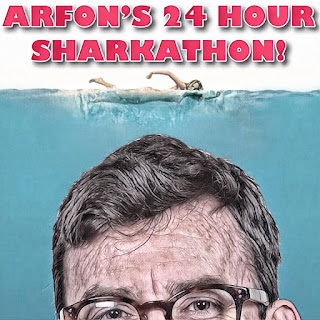 Well my Sharkathon has been and gone and I am happy to report that just like the previous ‘Friday the 13th Movie Marathon’ it was a massive success, more so as twice as much was raised for charity this time! The marathon started at 6 am on Wednesday the 25th of July and finished on the 26th at 8 am I watched all 17 of the listed movies, breaking my previous record! My sincere heartfelt thanks to everyone that sponsored me via the website or through the sponsor forms we raised £467 and all of it goes to the Alzheimer’s Society a worthwhile charity that helps advance research and improve the lives of people with dementia some of you may know this was a personal mission for me as I lost both my grandmother and grandfather to this horrible condition this year. I would also like to thank everyone that helped spread the word be it through the media or by simply pressing the ‘share’ button it’s not easy to raise awareness for these charitable events and a big thank you to all the encouraging messages I received throughout the day!  I would like to thank my mother for helping to raise additional funds through our sponsorship forms and Beth for being by my side for (most) of the day making coffee and replenishing popcorn! As promised, I posted photographs of my progress during the day on Facebook, login the start time of each movie here they are as they happened!


Now some of the more astute of you may be asking, “Hang on 26 hours? I thought the challenge was to be 24 hours?” Well you are quite right, during the day I was visited by a camera crew filming a segment for Heno (Welsh word for Tonight) a Welsh language television magazine show for S4C and so to make up for lost time I pushed the challenge along 2 hours! I was interviewed by singer and regular Heno presenter Elin Fflur, the episode can be found on the S4C Clic page but for the benefit of you non Welsh speakers here is the transcript for you!


Introduction by presenter, Angharad Mair, “During the show tonight we heard about the Kraken, a creature from the sea, thankfully sharks have not been sighted on the shorelines of Wales, despite the recent warm weather but there is a guy from Nefyn holding a ‘Sharkathon’, where he will be watching shark movies for 24 hours and Elin went along to watch a few with him!”
Item starts with a shot of Nefyn Beach, then stock footage of a great white!
(Voice over)  “When I think of sharks in movies naturally the first one that spring to mind is Jaws, a film that terrified me many years ago. But this is the kind of film that Arfon Jones from Nefyn delights in watching and to be honest he is rather obsessed with these horror and sci-fi movies.”
Cut to various shots from around the studio.
(Voice over) “And in his home in Nefyn I had I had quite a surprise, seeing that he had devoted an entire room to movies and comics!”
Arfon: “Here’s the studio come on in”
Elin Fflur: “WOW Arfon! (Laughs) I don’t know what to say! It’s absolutely unbelievable! The term in English is ‘Film Buff’ someone who is obsessed with movies, I think I can say without doubt you are a film buff aren’t you?
Arfon: “Oh yes! I can’t deny it look around me! Yes, I am obsessed and I am a film buff I adore horror and sci-fi. When I was 13 I had a summer job at a business that sold vintage comics and I started collecting them myself. I have all manner of comics, Batman, various Marvel comic titles, Topper, Beezer and I collect the annuals as well.”
(Voice over)  “Arfon is a full time illustrator and he creates, yes you guessed it Illustrations relating to horror, sci-fi movies and comics.”
Arfon:” I have made contacts throughout the world, commissioning comics and books. I illustrated the comic series called ‘Slaughterhouse Farm, a comic that was made in Wales, I once illustrated a book for Sir Patrick Moore and I also illustrated the poster for Zombies from Ireland a movie which was filmed here in North Wales.”
Elin:” And throughout your career you have met many of your heroes.  You have an interesting wall here in the house”
Arfon:” Yes, I have my ‘Wall of Fame’, people such as Stan Lee, Arnold Schwarzenegger, Elvira, Bruce Campbell and Buzz Aldrin the second man on the moon.”
(Voice over) “But today he is in his element watching movies through the day to raise money for charity.
Elin:”This challenge of watching movies straight through for 24 hours is something you’ve set yourself before.”
Arfon:” Yes, last time I watched all 12 of the Friday the 13th movies for Children in Need”
Elin:” And you have set yourself the same challenge this year, so what is the theme this time Arfon, and why are you doing it?"
Arfon:”Sharks, and I am collecting money for the Alzheimer’s Society in honour of my grandparents whom we lost this year.”
Elin:” Ok Arfon so I am going to watch a movie with you this afternoon, so what have you chosen for me?”
Arfon:”Sharkenstein! From 2016”
Elin:” ....Ok it sounds horrible, is it horrible?”
Arfon:”I hope so!” *Arfon offers her some popcorn
Elin;”But there is popcorn.”
*Elin puts on a shark hat and Arfon puts the film on. 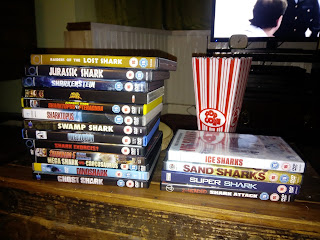 Once again, my sincere thanks to all that sponsored the event! 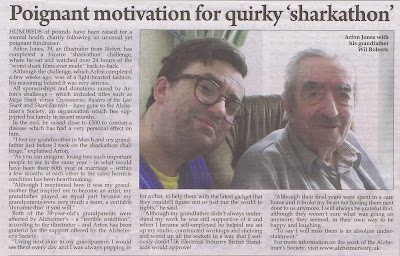 © Arfon Jones 2018. All images are copyrighted throughout the world.
Posted by Arfon Jones at 8:02 pm