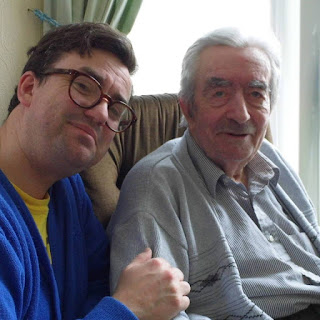 Another sad post I am afraid, as if losing my grandmother back in March wasn’t enough I lost my grandfather this weekend and as you can imagine losing two such important people to me in the same year (what would have been their 60th year of marriage) within a few months of each other to the same horrible condition has been heartbreaking. Although I mentioned how it was my grandmother that inspired me to become an artist, my grandfather played an equal part because my grandparents were very much a team, a veritable “dynamic duo” if you will, we would joke about how my grandmother was the captain and my grandfather was the helmsman and so I devote this post to taid*

Role models are important for children and I always looked up to my grandfather. I admired both his sense of style, wit and humor. He loved a laugh and I owe my penchant for risqué jokes to him. Having driven haulage trucks and public transport buses for most of his life and toured the country in a caravan on days off it seemed like he had the entire A-Z Great Britain Road Atlas committed to memory and seemed to know every turning, point of interest and back road and was mildly disapproving of our use of sat navs when we embarked on our own travels. He was also a walking Good Pub Guide always keen to recommend a good chip shop, cafe or restaurant he had come across on his travels (no one could exaggerate the size of a steak like him!) what was particularly inspiring about him was the enjoyment he took from simple pleasures in life such as stopping at a chip shop and eating them in the car (my grandparents always kept salt and vinegar and cutlery in the glove box for just such an occasion.) Through the 80’s and 90’s he was a bus driver, a title he took seriously wearing the company tie with pride and  drove the public bus route and the school bus run and so he had my back at least 3 out of 5 days of the week.

He would also be the driver on various private trips and outings and this is where he became the coolest grandfather ever, he would sometimes take us to these places! 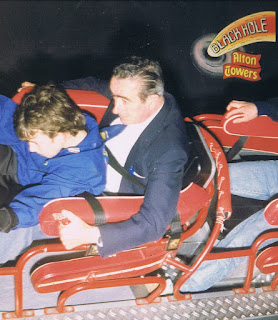 Because the bus drivers were responsible for bringing large groups of people to the theme parks and tourist attractions they were often treated like VIP’s being offered free lunches and free access to attractions (something he relished) and back in 1991 I was granted a day off school and was allowed to accompany him to Alton Towers where I learned that my granddad didn’t take himself seriously and was game for anything, riding on his first ever roller coaster The Alton Mouse he was terrified and he turned the air blue with profanity but he went on every single one with me (photo on the left was taken on the Black Hole) and I have never laughed so much in my life.
When he retired he continued to enjoy life touring all over the country in their trusty caravan (sometimes pitching a caravan a mere 40 miles away) or pottering around in his tool shed trying out the latest power tool he had or growing tomatoes in his makeshift greenhouse. He had his own room in their house that we would joke was where he ‘hid’ from my grandmother, a ‘man cave’ before its time, equipped with a reclining easy chair and flat screen TV with full access to all the Sky Sports Channels. Living next door to my grandparents I would see him every day and I was always popping in for a chat, help him with the latest gadget that he couldn’t figure out or just put the world to rights. Although he didn’t always understand my work he was still supportive of it and when I became self employed he helped me set up my studio, constructed worktops and shelving and wired up all the sockets in a way that I seriously doubt UK Electrical Industry British Standards would approve! Although his final years were spent in a care home and it broke my heart not having him next door to us anymore I will always be grateful that although he wasn’t sure what was going on anymore he seemed, in his own way to be happy and laughing. To say I will miss him is an absolute understatement, he will always be in my heart and the next trip we take I will take the most secluded back road I can find, stop at the first restaurant and order the largest steak in him memory. I will miss you taid x


Camcorder footage taken of him on back in 1992