Introduction: Adjusting and rewriting the past

Acknowledging artistic influences is a nice touch to someone’s ‘about’ page however back in 2014 I found myself having to edit mine somewhat when an enduring television personality named on my bio as a creative influence was convicted and imprisoned for sexual offences. As he was led away to begin sentence, his various honors and achievements stripped from him, people started to distance themselves from him and  history was effectively, rewritten.  It was a surreal time for me, because for many years I had regarded this man to be an integral part of my career, he had inspired and steered my life in this direction but now I wasn’t able to look back because most of the past had been wiped away. From now on I was no longer able to give his name when asked, “what made you want to become an artist?” and I was no longer able to recount how important his TV shows and books had been for me, no longer able to say that meeting him had been one of the highlights of my life, his photo was removed from my wall of fame and the paragraph referring to his influence was deleted from my online bio. But he wasn’t the only influence I had, far from it and so I have decided to go back and highlight others that influenced me just as much and played as much a part in my career path. 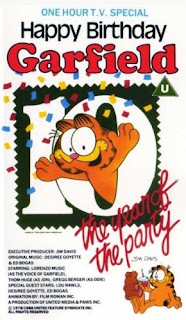 "Happy 40th Birthday Garfield!"  I was staggered that on the 19th of June Garfield celebrated his 40th Birthday as it seems like only yesterday we celebrated his 10th! Back then I was a massive Garfield nut and collected all things Garfield related and to this very day I have a lifelong love of Lasagna (a result of trying it after reading about it so often!) But this occasion also marks the 30th anniversary of one of my Artistic Influences entitled, Happy Birthday, Garfield an hour-long television special devoted to Garfield’s tenth anniversary in 1988 hosted by creator Jim Davis. It was released on VHS in the UK and I received the tape on my ninth Birthday (as seen in the bellow photograph taken of me on my 9th Birthday). The program certainly played a part in my career path as it not only provided an insight into the creation of the character but also took us behind the scenes to meet the people responsible for both the Garfield strips and animated specials. 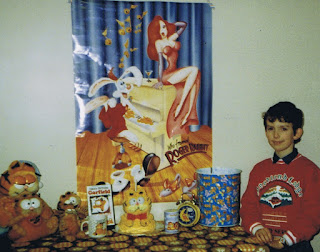 This VHS opened my eyes to the world of comic strips and animation, a profession I aspired to be a part of when I grew up. I was fascinated because it gave a voice to the man whose name I had seen in the corner of each strip and piece of merchandise, allowed me to see him draw his creations and talk us through the process of creating a newspaper strip. It convinced me that the life of a cartoonist in America was the life for me! Attending cartoonist events, Hollywood parties dedicated to your creations, flying in a balloons bearing the likeness of a character you had created and hanging out and chatting with fellow cartoonists by a pool was the way to go.  I watched it over, and over again and as my VHS collection has whittled down to single numbers over the years- Happy Birthday, Garfield remained on my shelf alongside all the books that I have devoted to animation/ cartooning history.

I have uploaded the VHS to my YouTube Channel for your viewing pleasure!

© Arfon Jones 2018. All images are copyrighted throughout the world.
Posted by Arfon Jones at 4:20 pm