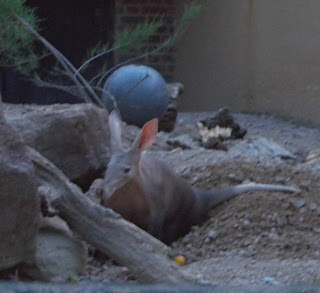 Tragic news from London Zoo, it has been confirmed that at approximately 6am this morning a fire broke out in the Animal Adventure section of the Zoo and spread to an adjacent shop. On-site keepers and the zoo’s security team moved animals to safe locations while London Fire Brigade tackled the flames. Six people were given help at the scene for the effects of smoke inhalation and shock but sadly it has been confirmed that nine-year-old Aardvark, Misha has died with four Meerkats still unaccounted for, presumed dead. Devastating news Mrs Jones and I spent our wedding anniversary at the Gir Lion Lodge and were treated to a wonderful after-hours tour of the zoo and one of the highlights was feeding the Aardvarks (I excluded this from my last post as its meant to be a secret but given the circumstance...) I have wonderful memories of throwing insects to them as the night set in, watching them both burrowing away, they were a delight to see.
My thoughts go out to the keepers.