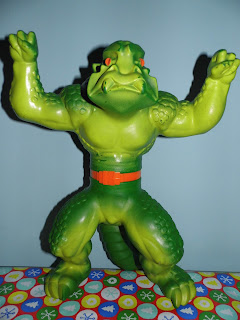 So did you have a good Christmas? I certainly did! Christmas 2017 was when I finally received a My Pet Monster of my very own (previous post) but Santa gave me that, Mrs Jones gave me something equally awesome!
A great little curio from the US of A that I am reasonably certain never made it to this side of the pond and I say that because A) I've never seen Krusher the “Growing Monster” ‘in the wild’ and B) it seemed that it wasn't a terribly successful toy line for Mattel in 1979 and this staggers me, because this 15 inch high green rubber figure had a great gimmick to it in that you could ‘Krush’ or mash it up and it would spring back to his original size when the air valve on its belt was turned! Amazing! Yet as I said it wasn’t a successful toy and so it is becoming harder to find (more so if you are after a boxed version) and knowing that had I been born five years earlier and on the other side of the Atlantic I would have adored this monster toy and so I wanted to add it to my collection, and that's just what happened! Thank you Mrs Jones!