I’m Back! An experience with Arnold Schwarzenegger 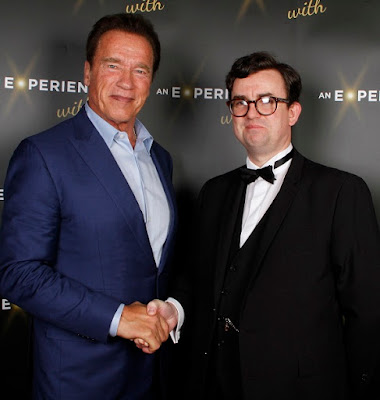 I told you I’d be back! So where have I been? Well, the studio mostly, completing various projects but I also (as the title and photo would suggest) met this gentleman, Mr. Arnold Schwarzenegger….
But first (as is often the case with me) a back story… Back in 2009 while checking my e-mails I was surprised to read, “Arnold Schwarzenegger is now following you on Twitter” I was aghast for all of 3 seconds! “THE Arnold Schwarzenegger?” I asked. Had he (for some reason) singled me out and decided to follow me on Twitter? Of course not, it was just a PR thing during his time as Governor of California, most likely off the back of those California Tourism TV ad campaigns shown in the UK that he starred in asking, “when can you start?” But for those 3 short seconds I was reminded of much I adored the guy and how there once was a time in my life when he was the only ‘current’ Hollywood actor who’s work I would go see on its initial release (an accolade perhaps only shared with Jim Carrey). As memories of care free evenings watching his movies with my brother and quoting his one liners with friends in art college came back to me I thought how amazing it would be to meet him someday, well that ‘someday' was to be the 21st of September 2017 at the Hilton Metropole in Birmingham. 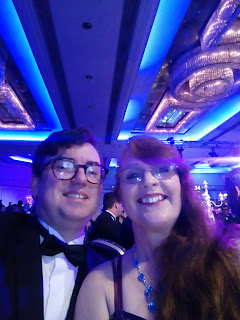 Event organisers An Experience With were bringing Schwarzenegger to the UK for a special black tie dinner experience celebrating the 30th anniversary of one of my all time favourite movie aliens, Predator! I remember catching it on TV one Saturday night expecting to be as entertaining as Commando (that we had watched the night before) and it was, but more so as this one had an alien in it, one with no interest in invading the planet- this one simply wanted to hunt humans for sport! I was hooked, I watched it and its equally great sequel over and over, read the comics and would draw the Predator throughout my teenage years so this event would not only present me the opportunity to meet Mr. Schwarzenegger but also raise a glass to one of my favourite aliens, this was too perfect to miss! Dressed up in our finest (Mrs Jones especially!) we arrived at the Hilton for what would be our second black tie event celebrating an alien! We made our way into a ball room which was surrounded by Arnie related replicas and props from such Terminator, T2, Conan the Barbarian and of course, Predator some of which were to be auctioned off later that evening. There was even a Predator on hand posing for photos, which I did (taking my first selfie on my new phone). 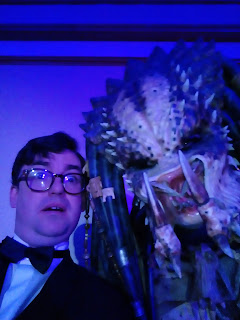 We took our seats and sipped our complimentary drinks while being entertained by top swing vocalist Robby Darin and the State 51 Swing Orchestra and they were superb, somehow managing a rare thing, playing all my favourite songs. They continued to entertain while we started on our “high-quality 3-course dinner” which starting (appropriately enough) with a starter, comprising of Parma ham with grilled peach, rocket leaves, parmesan flakes and black olive dressing followed by the main course of braised feather blade of beef with spring onion, crushed new potatoes, baton vegetables, broccoli and pan jus finished off with dessert strawberry cheesecake with fruit coulis garnished with seasonal fruits and crème chantilly and it was as delicious as it sounds. After coffee, the prize draw and auction an on screen run-through of Schwarzenegger’s incredible career and accomplishments was played before a countdown commenced introducing Arnie to the stage where he was met by a massive round of applause! When he did, it was an amazing experience, seeing the man himself in person! Just in case there were any doubts that it really was him he walked up to the end of the stage and yelled, “Get to da choppa!” which was met with an even louder cheers as he took his seat for an hour-long chat with interviewer Charlie Webster. Clearly in awe of him she asked about his amazing life, becoming the youngest person to win the Mr Universe title, winning it seven times in total, his career in Hollywood along with the making of Predator. His friendship with Danny DeVitto and his 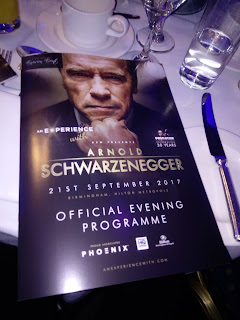 one time rivalry with Sylvester Stallone during the 1980s they would try to out do one and other, such as who had the least body fat, who was the most ripped, who had the biggest guns and killed the most people on screen and of course who made the most at the box office. It seemed at one time he tried to have more muscles than Arnie to which he quipped “Well, I say, good luck!” He also revealed Sly’s artistic side, discussing his paintings not to mention delivering a hilarious Stallone impersonation! The conversation then turned to politics and his becoming the 38th Governor of California and his pride in it being one of the largest economies in the world and No 1 in the US for clean air and water addressing another subject close to his heart the environment he raised concerns of how worldwide, seven million people are dying every year because of pollution. The hour seemed to fly by and it was time to wrap up but not until he was presented with a replica of the machete used in Predator to cut a giant 30th anniversary cake made by AB Cakes before going through to another room to meet and greet fans I followed on shortly after to meet him myself for a quick handshake and photo, before going back to my table to discuss how amazing he was with other table guests whom he had also inspired in some way over the years. We had an amazing time, many thanks to all involved especially Mr Schwarzenegger himself.