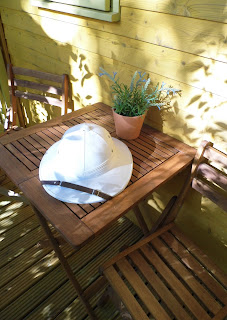 It's June, it's that time again, time to report back about the day we celebrated the day we got married. For the benefit of those keeping count (and don't read titles) this was the fourth. This time Mrs Jones and I spent it in the Land of the Lions in.... London! London zoo to be exact, at the world’s oldest scientific zoo's newest exhibit that not only (decoratively) transports visitors to India’s vibrant Sasan Gir to get a little bit closer to the majestic, mighty Asiatic lions but also the chance to sleep “within roaring distance” of them!

Having long been fascinated with animals and watching copious amounts of television in my lifetime London Zoo is very familiar to me but to be perfectly honest I had never actually visited before. So finally, after 30+ years I finally had the chance to visit Jumbo the elephant's old stomping ground! We spent a hot day navigating through parties of school children seeing the wonderful array of animals the zoo has on offer. Being the nerd that I am I would stop at familiar points of interest such as the Reptile House, the Raven’s Cage (constructed in 1829), the grade two listed Penguin Pool and of course the Snowdon Aviary, 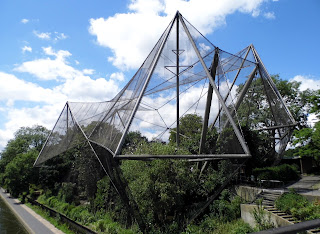 designed by and named after Lord Snowdon built in 1962 and opened to the public in 1965 it was the second largest aviary in the world but the first walk-through aviary in Britain, specially designed to allow close up views of birds. One of the things I enjoyed about the Zoo (apart from the animals of course) was the balance the zoo had between introducing new and fresh ideas and their own history. We saw Giant Galapagos Tortoises, Penguins and Lemurs but unfortunately the anteaters had been relocated to behind the giraffe house to make way for a new dinosaur attraction (leaving me with mixed emotions as I love anteaters and fibreglass dinosaurs...) and then after “oooh-ing" and "aaaaahhh-ing" over Marilyn the two-toed sloth's uncharacteristic 'speedy' constitutional around their jungle environment and the extremely photogenic otter family over at the Otter Holt we made our way to the Gir Lion Lodge to 'check-in'. 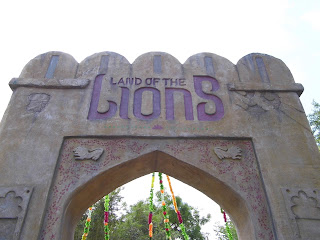 Officially opened by HM The Queen and HRH The Duke on the 17th March 2016 (the original lion terraces was also opened by them both in 1976) Land of the Lions cost £5.2m to build and is five times the size of the previous lion enclosure and as previously mentioned designed to resemble Sasan Gir, an Indian village in the heart of the Gir Forest where the last 500 wild Asiatic lions live and the attention to detail is amazing as it both entertains and highlights ZSL’s international conservation efforts to help protect this endangered species. We arrived at the nine brightly painted lodges inspired by the hotels in the Gir Forest and were greeted by the friendly keepers. We were given the Oriole Lodge equipped with en-suite toilet, basin and shower and tea making facilities and a rather nice private veranda to soak up the atmosphere and relax. But this excursion was not just about finding a place to spend the night in London! 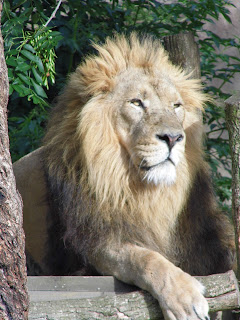 Once we had settled in, glass of complimentary Prosecco in hand we were given an exclusive after-hours tours of the Zoo offering a glimpse of what it's like at the zoo once the public have left by the friendly, knowledgeable keepers. We met Bhanu and lionesses Indi, Rubi and Heidi learning more about them, their conservation and their upkeep. Interestingly as part of the lions enrichment, sacks soaked in unwanted perfume are given to the lions with Old Spice being a particular favourite (a little discouraging as its also my favourite brand of aftershave and I was wearing it at the time...). We then made our way around the zoo and some of the enclosures and even had chance to feed Thug and Nicky the pygmy hippos before having our own delicious two-course dinner. Once we had finished our puddings we toasted our anniversary (and the birthday of another guest) we had another 'mooch' around meeting two of the zoo's nocturnal residents which I will not tell you about because its meant to be a secret... but they were delightful! 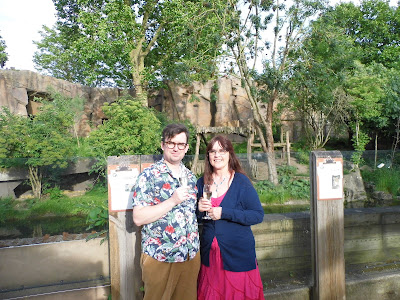 The next morning was fantastic! I normally associate the bustling sounds of cars, sirens and Ring Necked Parakeets with waking up in London so being woken to the sound of macaws, flamingos and lions was a new one on me! I had a quiet sit down on the 'private veranda' before we went to have our Full English breakfast before visiting the old elephant house to see where all the herbaceous animal's meals are prepared. Some Tapirs and gibbons followed before we went back to “oooh" and "aaaaahhh" some more at the two-toed sloth's and otters (not me you understand, but Mrs Jones, although I did make a similar sound when we briefly saw the giant anteaters roaming their enclosure before a fresh party of school children mobbed to the fence) and that was our sunset, after-dark and early morning excursion to London zoo that I highly recommend, as always I hope this was of interest!

© Arfon Jones 2017. All images are copyrighted throughout the world.
Posted by Arfon Jones at 7:14 pm