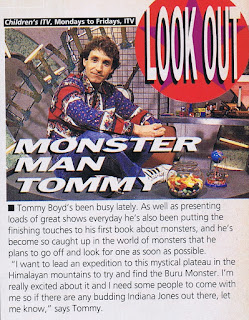 An intriguing clipping from Look-In Magazine from the 15th of February 1992 entitled ‘Monster Man Tommy’ featuring current face of Children's ITV Tommy Boyd. Promoting an up and coming book that stated, “Tommy Boyd has been busy lately. As well as presenting loads of great shows everyday he’s also been putting the finishing touches to his first book about monsters, and he’s become so caught up in the world of monsters that he plans to go off and look for one as soon as possible. “I want to lead an expedition to this mystical plateau in the Himalayan mountains to try and find the Buru Monster. I’m really excited about it and I need some people to come with me so if there are any budding Indiana Jones out there, let me know.” says  Tommy.” 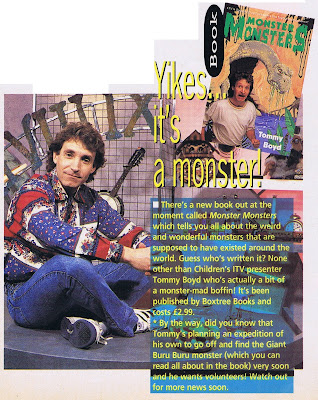 Then on the 2nd of May 1992 Look-In followed it up with another article informing us that the book had now been published by Boxtree and that it was called Monster Monsters and that it would educate readers about, “the weird and wonderful monsters that are supposed to have existed around the world” before further elaborating on Tommy’s apparent fascination with monsters when he admits to being, “actually a bit of a monster-mad boffin!”.  When this book was published I had fully immersed myself into my fascination with monsters, and I was equally a fan of Tommy Boyd who was a regular face throughout my childhood be it from his days presenting Saturday TV-am show Wide Awake Club from 1986–1990 (and Sunday spin-off show WAC Extra) to the time he presented Children's ITV from 1991 to 1992. The book's back cover reads, “Calling... monster trackers everywhere. You come across strange giant footprints leading into a dark, clammy cave. Would you... faint with fright... quietly tiptoe away...or explore further? Tommy Boyd has collected fearsome facts and monstrous myths which will freeze the blood in your veins! Read about the huge body with a serpent's neck which emerged from the dark waters of Loch Ness, or a tentacle half the length of a football pitch which was found on a Florida beach and ask yourself: What is out there?”  packed with stories, games, quizzes, trivia, things to do and monsters to make and priced £2.99 it was a terrific read to any budding monster hunter! This wasn't actually the first time Tommy put his name to a monster themed book, the Wide Awake Club released a book entitled Ghosts, Monsters and Legends in a 1986 tie-in with their segment on the show of the same name (although how much Tommy was involved in the writing process is unclear) what is especially interesting in both articles is this apparent expediction he wanted to lead, the second article provides a little more detail, “By the way, did you know that Tommy's planning an expedition of his own to go off and find the Giant Buru Buru monster* (which you can read all about in the book) very soon and he wants volunteers! Watch out for more news soon.” Did this expedition ever happen? Even in the book he gives map references! Attempts to contact Mr Boyd directly have yielded no results, so does anyone out there know? 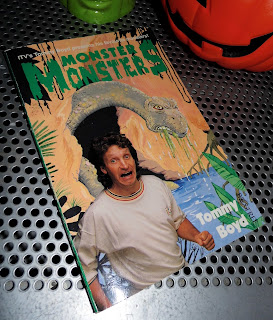 UPDATE: 29/03/2018 A gentleman called Darren a budding cryptozoologist in his "younger days" got in touch and shed further light onto the Giant Buru Buru expedition, “Tommy Boyd went on Pebble Mill at 1 to advertise his Monster Monster book and also to talk about getting an expedition up and running to go to Assam in Northern India to look for the Buru Buru. I contacted the show and ending up going on the training weekends and got picked. I think there was about 11 chosen in all. We only had a few short months to raise the money needed and only a handful could raise the needed amount, unfortunately i couldn't raise the funds and had to drop out along with a few others. The expedition to find the Buru Buru fell through as it had to be cancelled due to some form of terrorist activity in the area and people being warned not to go. The expedition was changed at the last minute to go to Cameroon in Africa to look for the Mokele Mbembe (a sauropod also mentioned in the book, actualy the front cover is the Mokele Mbembe) instead. As i said only a few went (i think about 5 and the two sas leaders. Tommy didnt go" So there we go thanks Darren!

© Arfon Jones 2017. All images are copyrighted throughout the world.
Posted by Arfon Jones at 6:31 pm