Another year, another Wales Comic Con! I had a great time at the Hellbound Media table at this year's event as ever it offered me the opportunity to meet new people and catch up with people I already know (in one instance someone I hadn't seen for over 13 years!) and signing the latest issue of Slaughterhouse Farm (that I illustrated) I knew the day was going to be a good one when none other than Sallah himself, Mr. John Rhys-Davies came over to the table to say hello and good luck! I faired a little better this year in documenting the event with photos, however my camera doesn't seem to like the lighting of Glyndŵr University's Sports Hall, never the less here's a few pics, if these feature you drop me a line so I can credit you. 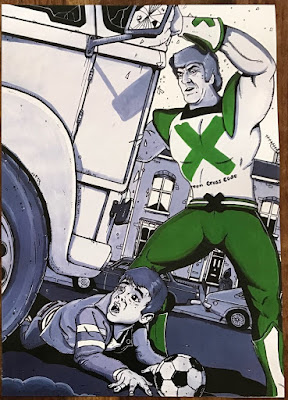 I unveiled my 'Elvis meets a Mermaid' painting in a previous post, recounting the time Elvis visited the Weeki Wachee Springs mermaids back in July 30 1961. The print was up for sale at event as too was my second painting for this month 'The Green Cross Code Man' dedicated to an almost forgotten part of British popular culture, the Green Cross Cod Man a British superhero from 1970 whose sole mission was to teach children road safety. Before he was Darth Vader David Prowse MBE, played this enduring figure in a series of classic Information Films (PIFs) sponsored by the Central Office of Information for the UK Department of the Environment and they ran almost continuously on British television from 1975 to 1990's closing with his famous slogan "I won't be there when you cross the road / So always use the Green Cross Code" well this painting asks what if he was? What if he was there to save all children that carelessly strayed onto the road? Having wanted to paint this image for some years I made it a priority this year because the big guy himself Dave Prowse was at the event. Having been quoted as saying that the Green Cross Code Man was the character he was proudest of he was very complimentary of the piece and insisted on writing the green cross code on the original painting! 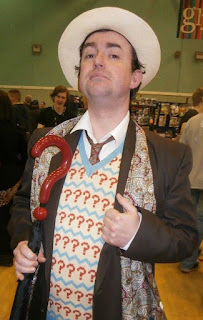 After lunch I went off for a quick change, last year I was accused of 'dressing down' (no bow tie!) by Matt Warner so with this in mind and there being little to no 7th Doctor cosplayers about Idecided to dress up as him myself for the afternoon... great fun! thanks to everyone that took the time to compliment my attire and my sincere thanks to all involved in its organising and those of you that supported the Hellbound Media table and took the time to say “hello”! Hope to see you at the next one!