Around the Studio: My Grandpa Munster (inspired) Electric (reading) Chair

Following on from my recent radio interview I have had requests to see the items featured in the interview, the studio is still currently being renovated but I will endeavour to answer the request, so first up, my reading chair.

Four years ago after ten years faithful service I had to dispose of my old leather reading chair. I was genuinely sorry to see it go but vowed to replace it with something even better and set upon the idea of constructing my very own reading chair that would not only be a practical piece of furniture but also something to sit in during my twilight years (well I am pushing 40 now) and recount how I had crafted it with own hands. I had a specific idea in mind and two years later with that specific idea in mind I happened to discover this wooden chair (standing at around 4 foot) outside a second hand furniture shop, I wouldn’t call it's construction amateurish but it had almost certainly been someone’s wood craft project at one time and the shop (that evidently didn't want it) sold it to me for £5. I was delighted, I had snagged the bear bones needed for creating the reading chair that I had always wanted for a bargain price. Having brought the chair home with me I found a corner for it and revealed my plans to my family, I was going to customise it into a Grandpa Munster (inspired) electric chair. They were not convinced.


I've been a life long fan of The Munsters and even though I had long given up actually living in the house I hadn't ruled out owning parts of it such as Grandpa's electric chair. As there doesn't seem to be a definitive look for an electric chair I opted for making it look as close to Grandpa's as I could and with next to no information available about the original prop on the internet, it gave me the perfect excuse to re-watch the series and make notes.

I altered the back of the chair and added some additional sections made up from offcuts from previous projects and the chair soon started to take shape. Now with the bear bones and initial shape I set about adding the details that would define the chair, vintage style nails and wood stain were added and removed accordingly to give an aged/worn look (paying particular attention to areas where flaying or attempts of escape might have taken place). As I wanted all the leather straps/restraints to look original and match I taught myself leather belt making and with a length of dark 'antique look' full grain leather and some 'antique style' half single roller buckles I fixed the aged/crackled straps in place with vintage style, brass upholstery staples. The metal hasp shackles were created using an old plastic pipe that I cut and then added hinges, spray painted and then attached to the arms with mirror screws. For the all important electrical insulators I called upon the skilful talents of Mr Andy Dingley of Atelier Fabry-Pérot who laser cut a few for me, I painted them white and spray varnished them to make them look porcelain adding that essential electrical look to the chair. Spare lengths of black cable was threaded through the chair, wrapped around and then connected to the insulators. The only part of the project that I strayed away from the original design was the head piece itself. 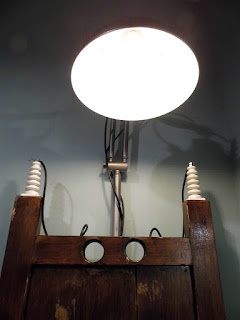 Even though I already had an industrial style ceiling light shade for the headpiece I found a Holme Angled standing floor lamp that provided a rather nice frame to hang over the chair and so I opted for using it instead, removing the lamp's standing base I secured it to the back of the chair with an bracket clamp (designed for securing aerials to caravans) then added smaller insulators on the headpiece before attaching a line switch on the mains cable and removing all traces of chrome with a can of gun metal grey spray paint and a dash of black paint and popping-in a vintage Edison filament bulb! Having resisted the urge to layer the chair with cobwebs the entire project was finished off with a Gothic/Lily Munster inspired cushion customised by Mrs Jones to assure that I would be comfortable while I sat in my electric chair. So there you have it, I'm rather pleased with the end results and delighted that I finally have my very own electric chair and often get a 'jolt' when visitors to the studio ask to sit in it!

© Arfon Jones 2017. All images are copyrighted throughout the world.
Posted by Arfon Jones at 11:20 am