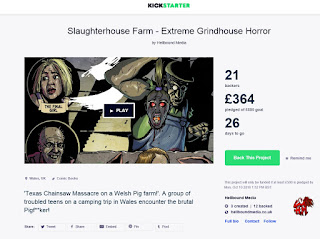 My good friends at Hellbound Media are currently looking for supporters to help fund the fourth and final instalment of fan favourite Slaughterhouse Farm! I've illustrated this comic series for four years now and I am delighted with how well it has been received. Even though the kickstarter campaign was only launched four days ago it has already reached the 45% mark! Proof of how much of a hit this title is with readers. But fear not, there is still time to get involved (at the time of writing this) twenty six days in fact to sign up and support the campaign and gain some marvellous rewards including art cards, back issues, badges, t-shirts and also the opportunity to feature in the comic as a gory corpse as drawn by yours truly! So join in the fun and support the independent comic scene by following the link and pledging your support!


© Arfon Jones 2016. All images are copyrighted throughout the world.
Posted by Arfon Jones at 2:14 pm