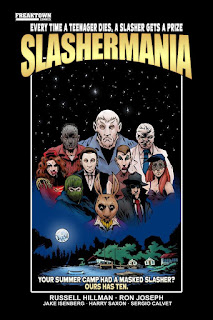 Just wanted to tell you about an exciting project that I’m involved with, Freaktown Comics are currently looking for Kickstarter backers to back their latest title, Slashermania! This 168 page graphic novel celebrates the slasher movie genre serving a “tribute to, and an examination of, the eighties slasher movie phenomenon”. This terror tale set in 1983 tells of a group of troubled teens that are taken to a summer camp facility to be trained as counsellors. But unbeknown to them they are actually part of a bizarre contest that sees 10 masked maniacs attempting to win the coveted Slashermania Slasher of the Year award! Written by Russell Hillman and illustrated by Ron Joseph and CJ Camba Slashermania promises “It’s mostly played straight but with an undercurrent of post-modern self-awareness and some appropriately inappropriate laughs along the way - carefully designed not to undercut the scares.”
Inked by Jake Isenberg, coloured by Harry Saxon and lettered by Sergio Calvet the book will also include a 12-page pin-up section featuring work by “the best artists in the world of indie and alternative comics” such as Phil Buckenham, Dennis Booth, Agustin Calcagno and yours truly!
The book promises to be great fun so follow the link, show your support and back this project and help make this book a reality! Tell your friends, spread the word and share the love!


© Arfon Jones 2016. All images are copyrighted throughout the world.
Posted by Arfon Jones at 3:49 pm