Artist Sigmar Polke (1941- 2010) has been heralded as one of the most significant German artists to emerge from the 1960s, making art from a various materials from painting, drawing and film to potatoes, snail juice and meteor dust. The Tate, regard him to be one of the most exciting and experimental artists of the last 50 years describes him as, “ an artist he responded to consumer society, confronted the memory of the Nazi’s, and took hallucinogenic drugs.” They recently had one of his more famous creations on display, his Kartoffelhaus (Potato House) (1967). Once again to quote the Tate, “This potato house grew in Sigmar Polke’s head; now it travels the world. Designed to flat-pack for easy transportation, the potatoes are provided at each port of call. It is not a cage, for no cage ever had one wall missing. This is the house of the ‘dissident dweller’; a temporary shelter from which to view the world, or the circling worlds of Polke’s imagination.” After the exhibition had ended at the Tate one of my creative comrades* Julie Gritten had the incentive to collect all the potatoes left over and put them to good use, namely plant them and give them out to fellow artists for them to do with them as they saw fit. On Sunday we all met up at Julie’s studio and had an 'Arty Farty PoTATEo Party', we showed off our work, discussed art and had some delicious home made Leek and PoTATEo soup, made from the Polke potatoes that Juilie had grown in her garden. I had a fantastic time my sincere thanks to Julie for inviting me. 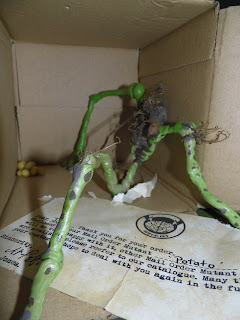 So what did I bring to the Arty Farty PoTATEo Party? When Royal Mail delivered my potato it had already started to take root and almost seem to resemble a spider. A few weeks later it looked like a scorpion, and as the newer potatoes started to grow and the original potato shriveled up I decided to make it into a Mail Order Mutant potato!  Inside the shipping box (complete with branding and postage labels) we see the mutant potato protecting its ‘eggs’ in the corner, feeding on the 'thank you' note enclosed in the box that reads, “Dear, Julie Thank you for your order. Enclosed is your Mail Order Mutant Potato I hope you will be very happy with it, other Mail Order Mutant vegetables are available please reefer to our catalogue. Many thanks for your custom we hope to deal with you again in the future. Sincerity, Arfon Jones.” 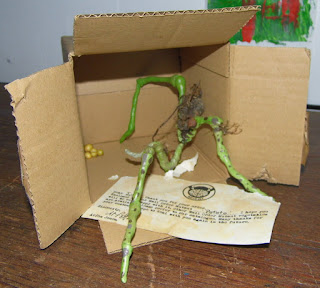