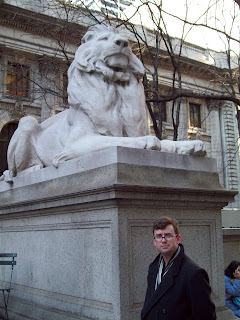 This will now be my 100th post since starting this blog back in September 2009. I have decided to use this as an excuse to go back in time! Much like my ‘2009 end of year recap’ this blog post will recap 10 months before I started the blog and write about the time I made a pilgrimage to New York to celebrate a big influence for me growing up it both shaped my life and my work… Ghostbusters!
I saw this film during its original theatrical release back in 1984 and like its subsequent sequel, cartoon series and merchandise it has stayed with me ever since.
This pilgrimage was an especially poignant celebration of my youth, as it not only accrued during my final month of being “twenty something”, my brother also accompanied me, as children we rarely saw eye to eye but we both loved Ghostbusters. We hadn’t intended to make a comprehensive trip, just a few choice locations of particular points of interest to us so apologises if you are expecting a detailed tour. Despite the cold our spirits were high (pun definitely NOT intended) as we made our way to the first location which coincidentally was the site of the Ghostbusters first investigation, the New York Public Library on Fifth Avenue. There was no mistaking this magnificent building with its iconic marble lions seen at the very beginning of the film. Rocky fans will run up the Philadelphia Museum of Art steps, Ghostbusters fans run down these steps! 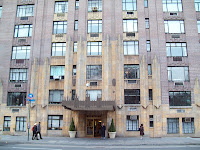 Dana Barrett's Apartment otherwise known as Spook Central 55 Central Park West. I have drawn this building countless times. Outside this very building the Ghostbusters stepped out of Ecto-1 and made their way in to showdown against Gozer the Gozerian! The Stay Pufft Marshmallow Man stepped on the church before climbing up the side of this very building! (Yeah I know it didn’t really happen! but as a child it was very real!) Opposite the building is the Tavern on the Green where Louis faced the terror dog! 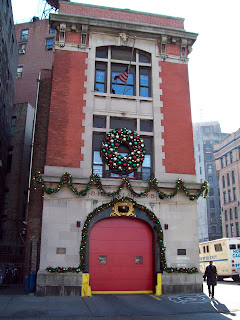 And then the finale, what the trip had been building up to the famous Ghostbusters headquarters Hook and Ladder 8, 14 North Moore Street. Used in both movies it featured in the animated series, comics, games and toys this building was like a temple devoted to my childhood. I stepped out of the cab and stared at it in awe, my young self wanted to live in this building and now here I was standing outside it! Being an actual firehouse it was interesting to see how different people view this building, we asked a citizen of New York to take a photograph and she simply took a photo of us cutting the building out of the shot… For her it was just that firehouse she saw every day she didn’t view it in the same manner as the tour bus filled with English tourists that piled out for photographs moments later. We were fortunate in the fact the fire truck returned as we stood outside, the crew very kindly granted us the opportunity to see the original Ghostbusters sign from Ghostbusters 2 left after shooting.
Once it sunk in we walked away, I took one final look with a stupid smile on my face. I didn’t think it would be possible to love the film anymore than I already did but it happened and certainly didn’t think it would be possible to add more precious memories to it but it happened, so pleased that I made this pilgrimage.
Well there you have it blog post#100 I hope you enjoyed it, it certainly brought back some happy memories for me anyway. I have decided to write more posts that address my influences over the coming months- covering locations, objects or people in the hope that they might provide an insight to my work. Do please feel free to comment on the posts and thanks for reading the previous 100!

© Arfon Jones 2012. All images are copyrighted throughout the world.
Posted by Arfon Jones at 8:07 pm