Very sad to hear that pioneering astronomer, physicist, and British legend (not to mention one of my heroes) Sir Bernard Lovell died on the 6 August aged 98.  Bristol born Sir Bernard founded one of my favourite man-made structures, the third largest steerable telescope in the world The Lovell Telescope based at Jodrell Bank, Cheshire. Back in 2010 I featured Sir Bernard in my September Science Spotlight,

“Sir Alfred Charles Bernard Lovell, OBE, FRS Born in 1913. Studied physics at the University of Bristol, obtaining a Ph.D. in 1936. He worked in the cosmic ray research team at the University of Manchester until the outbreak of World War II. During the War he led the team at the Air Ministry’s Telecommunications Research Establishment, developing the H2S, the first airborne, ground scanning radar system earning him an OBE in 1946. he then returned to Manchester with an ex-army mobile radar to continued his research on cosmic rays However electrical interference from the city’s tram system prevented him from doing so forcing him to move to The University’s horticultural/botany department at Jodrell Bank, Cheshire. The first Transit Telescope constructed in 1947 provided valuable data however readings were limited, a fully steerable telescope was needed prompting the construction of the “Mark I” Telescope in 1957. Standing at 76.2 m (250 ft) in diameter it was the largest steerable dish radio telescope in the world. That same year, the Soviet Union launched the first space satellite, Sputnik I the “Mark I” was the only telescope in the world able to track the satellite's carrier rocket. Since then, it has been used for pioneering work in the discovery of pulsars and quasars. Lovell was knighted in 1961 for his contributions to the development of radio astronomy and served as Director of Jodrell Bank until his retirement in 1981.”

Being one of my sanctuaries I have been to Jodrell Bank many times and still marvel at the Lovell Telescope for both its sheer size and accomplishment, it now stands as a testament to a great man’s determination find out more about the Universe. RIP Sir Alfred Charles Bernard Lovell, OBE, FRS (1913-2012) 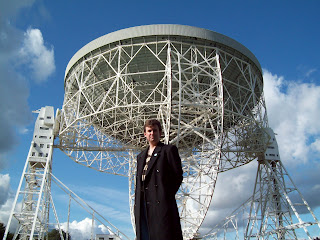 © Arfon Jones 2012. All images are copyrighted throughout the world.
Posted by Arfon Jones at 3:36 pm