Way back (circa. 1983) I collected ‘Spooky Chews’ badges I have absolutely no memory of the sweets themselves but the badges were firmly etched into my memory. Each badge represented a classic monster Dracula, The Frankenstein Monster, The Wolfman, The Mummy etc. these little badges mark the early beginnings of my fascination with all things monster related. Fast forward three or four years later and the badges were long gone, lost to the mists of time but one day as I played in the garden I made a chance discovery! To my amazement I discovered a single badge under the grass! Somehow a Wolfman badge had survived the elements and several years of mowing and I now had it in my possession again! It’s a vivid memory, as I held it in my 7 year old hand I remember thinking, “I’m sure they used to be bigger!” Despite being pleased with my discovery I’m afraid to say that history repeated itself and I lost that badge again.
Onwards to 2012 I was browsing on eBay and was amazed to find that Wolfman badge again! CEREAL PREMIUMS TOYS KELLOGGS FREE GIFTS MONSTER BADGES MUNCH CRISPS SMITHS ???’ 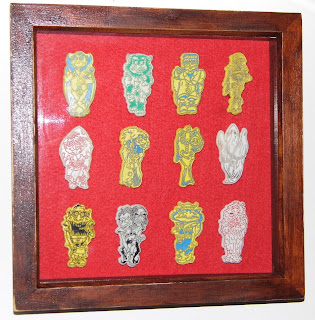 I am happy to report that I won the auction but naturally I then had to acquire the complete set, not easy because if they came up for auction at all they would either be over priced, sold separately or in an expensive group lot made up of many doubles. But here they are all 13 of them! Dracula, Wolfman, Frankenstein Monster, Mummy, Hunchback, Skeleton, Ghost, Ogre? Two-headed man, Viking- troll- man and slime monster and all of them lovingly mounted and framed and hanging in my studio and I simply adore them! Being ever enthralled by nostalgia these items hark back to a simpler time that saw me sitting in front of the television set watching The Munsters, The Groovie Goolies or The Real Ghostbusters eating something endorsed by the Honey Monster, the Chewits Monster or the Monster Munch Monsters! Which leads me neatly to the next item on the agenda...

Monster Munch! As the main site approaches completion I am attempting to amalgamate my other sites, first up is my Monster Munch Collection site. As you may have guessed this site is devoted to all things Monster Munch… For those of you who hadn’t guessed Monster Munch is a brand of baked corn snack (or crisps as we call them in the United Kingdom). Launched in the late 1970’s and aimed primarily at children the crisp manufacturer Smiths produced many items of promotional material ranging from fan clubs to television adverts and to someone like me that is both interested in design, relishes nostalgia and loves monsters these items are simply delightful. Despite being a long term Monster Munch fan it wasn’t until 2003 that I embarked on this strange hobby, I hadn’t intended to embark on a mission to acquire all things Monster Munch related but the first item I bought was a Blue Monster glove puppet! I had no idea it even existed until I had found it on ebay but it fascinated me and from then on I have been collecting ever since. I created the site in 2010 as an attempt to catalogue the items in my collection and highlight these wonderful examples of 1980’s – 1990’s promotional designs and provide a back story on them and since creating the site I have had people contacting me, thanking me for bringing back fond memories for them (an unexpected bonus). So do please check out the site for yourselves and see what nostalgic memories it conjures up and feel free to share your monster memories!

© Arfon Jones 2012. All images are copyrighted throughout the world
Posted by Arfon Jones at 5:39 pm