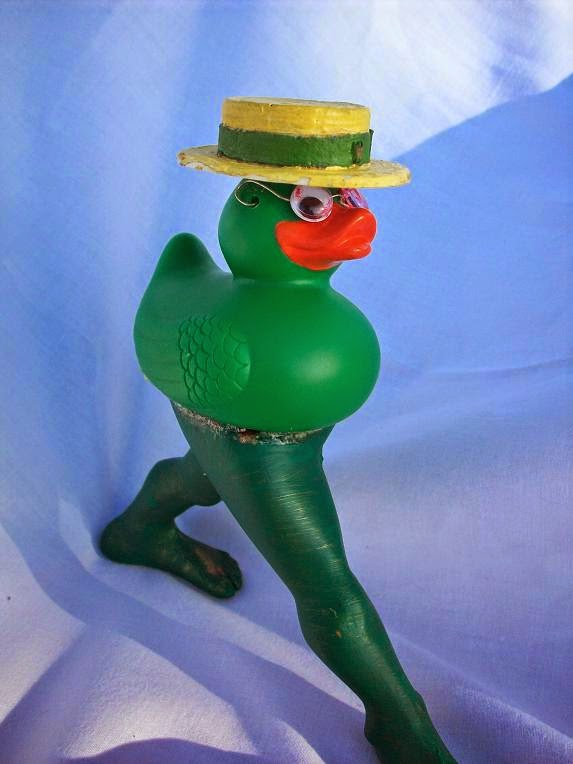 The Operation Bath Duck experiment is going very well. I have Scout Ducks reporting back from all over the planet! Scout Duck:006 reported back from Huddersfield in West Yorkshire and is in the company of inventor, artist and visionary Wilf Lunn! Known to thousands for demonstrating his fantastic creations on such shows as Vision On, Jigsaw, Eureka and Fantastic Facts. Before working in television Wilf first started making miniature bicycles when he taught lip-reading & religious knowledge at Odsal House School For the Deaf It was during an exhibition of his bicycles he was invited to appear on television. Growing up in the 1980’s I adored Wilf’s work and I was mesmerised by the wonderful inventions that he demonstrated in his workshop. His invention for helping dog’s lose weight in the form of walking dog food still remains fresh in my subconscious to this very day! So, it was to my absolute delight that Scout Duck:006 found its way to Huddersfield and become a part of Wilf’s version of how man evolved! ladies and gentlemen of the World Wide Web I give you ‘Evolution Duck’ By Wilf Lunn! To find out more about Wilf and his brilliant creations visit his Official Web Site he also writes a Colum for the Huddersfield Daily Examiner. Oh, and be sure to order his fantastic book WILF LUNN - "MY BEST CELLAR" (autobiography up to the age of eleven & other stuff)
For a detailed account of the project please read 'Operation Bath Duck'
© Arfon Jones 2010. All images are copyrighted throughout the world.
Posted by Arfon Jones at 12:06 am