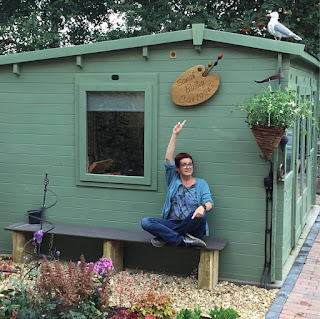 The second edition in a series that explores and acknowledges my artistic influences over the years highlighting those that have played a part in my career, today’s edition Sarah Bailey- caricaturist. I first met Sarah back in 1994 when I was 14 at the Royal Welsh Show (once an annual family trip for us) I saw a large crowd of people, curious as to what was going on I went over to look and there was a woman sitting in a chair drawing caricatures. I was fascinated to see someone drawing people in seconds and being paid for it! This was Sarah, I was enthralled by the speed she worked at and how great the likenesses were. I hung around for a while, trying to pluck up the courage to introduce myself (contrary to popular belief I’m rather shy) and tell her how I too was an inspiring cartoonist. I soon ‘latched on’ to  her and spent the week  standing in the wings and watching her work not only studying how she captured facial details, the materials she used but also her wit and her rapport with the public. She was very patient with this 14 year old lad that loomed over her, asking questions – and when the show was over we kept in touch. After returning home I worked on likenesses and when I went back to school I used my teachers as test subjects (a great tip for any budding cartoonist because teachers think you’re taking notes!) and this is an important point in my career as people’s likenesses continues to be a major factor in my work.  As I left school and enrolled in art college I continued to write to Sarah who in turn continued to guide me, also teaching me of the importance of self promotion. During my college years I worked as a quick fire cartoonist at events and parks and without a doubt it was Sarah’s practices that I errr... ‘Borrowed’.  I’m happy to say that we are still in contact and she’s still creating quality caricatures in her studio but who is she? What’s her story?

As previously stated Sarah is a caricaturist that hails from Coventry who proudly boasts, "Twenty years of caricature and never been sued!" who has long been into drawing in fact she told me that she wasn’t, “long out of diapers” when she started and that it was more of a, “compulsion to draw rather than a simple hobby”.  Her drawing surfaces included standard paper, pavements, walls... anything that happened to be near her crayon! She became particularly interested in faces and all the different expressions, angles, beards, glasses + varying permutations and  would spend many a happy hours doodling people, without them realising in restaurants, shopping precincts,  classrooms (in turn improving  the speed of her drawings, something that would prove to be vital in her profession) and apparently she would get  into trouble when teachers discovered that she had in fact been doodling them instead of writing notes on the Battle of Hastings! She attended a girls school, which was horrible by all accounts as during her final years the art teacher  who had taken a dislike to  her did everything she could to undermine her confidence instead nurturing her talents. Yet despite this she attended Art College in Nuneaton which proved to be great experience for her because they had encouraging lecturers there she told me, “ I didn't shine particularly but I did enjoy learning new skills and trying new mediums  including sculpture, photography, pottery, fashion etc” and once she had acquired a diploma in art she decided to “lay down my drawing tools to expand the mind a little!” and went on to higher education, achieving degrees in English ,drama, psychology and media studies. However the drawing tools didn't lie idle for too long, she  found herself doodling her fellow students and lecturers ( she found it easier to concentrate on a lecture while drawing) “It was like a nervous tic that I couldn't control, Luckily,  my disorder was appreciated by the people around me”.  She did a bit of busking during the holidays, drawing caricatures in Torquay and Stratford then temped for a few months to pay off her college debts before setting herself up as a full time caricaturist in 1990, travelling the country attending the craft fair/agricultural show circuit, drawing quick caricatures from life and offering coloured caricatures through the post from photos before hiring herself out as party entertainment at weddings, barmitzvahs, private parties and corporate events and she’s never looked back.   entertaining guests and providing them with a unique memento of that occasion.
As mediums changed she has embraced social media and now uses a tablet for creating portraits touring the nation on what she calls, “a one-woman crusade to make people see themselves in a whole new light”

When asked about what she remembered about the time we met back in 1994 she answered, “While I was at a welsh agricultural show I met a cute young kid named Arfon who stood glued  to my side for 4 days chatting and observing me at work. He was bright and entertaining + useful -translating the Welsh heckles into English! I saw in him the same seeds of art enthusiasm that I had had as a youngster- but he had far more talent!” (Her words not mine!) Either way I thank her, for the kind words and inspiration, wisdom and guidance over the years. Be sure to check out her site and see her work for yourself, you can also find her on Facebook and YouTube or better yet hire her for your event! Tell her Arfon sent you!
© Arfon Jones 2018. All images are copyrighted throughout the world.
Posted by Arfon Jones at 1:45 pm