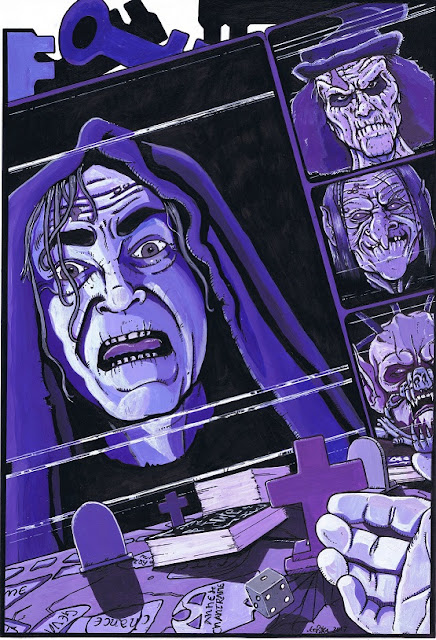 I try (whenever possible) to create a nostalgic horror based painting in time for Halloween in the hope that it digs up some long long buried memories for you all out there. Having depicted Ghostwatch, Dr Walpurgis'Vault of Horror and more recently The Deadly Ernest Horror Show I thought this time I would move away from television and create a game based painting instead so I give you, Atmosfear!
The 1980’s and 1990’s was a tough time for board games, they suddenly found themselves competing against the highly lucrative video gaming market forcing them to devise new and exciting ideas to help sell their products, giving rise to the interactive video board game genre -games that incorporated your VHS player, giving us such games as Star Trek The Next Generation VCR board game, Dragon Strike, Hero Quest, Rap Rat and the most well known of them all Atmosfear! Atmosfear (actually called Nightmare but it was changed to Atmosfear in Europe to avoid confusion between an existing game) originated from Australia having been created by Phillip Tanner and Brett Clements of the production company A Couple 'A Cowboys and when the game was released in Australia in September 1991 it was an instant hit, selling one hundred thousand units in its first year alone (five times more than Trivial Pursuit). Backed by a heavy television and cinema marketing campaign and promotional Dance Parties the game broke all records for board games and by the mid 1990’s it was the most successful advanced board game in history and with the international acclaim it gained it became Australia’s biggest entertainment export since Crocodile Dundee!
The game itself was simple enough, which helped it’s success 3–6 players had to collect keys while trying to beat the clock however the real reason everyone played it was because of the Gatekeeper (played by Wenanty Nosul) who would appear at random intervals taunting, heckling and rewarding players as the game went on the player that collected all six keys and didn't draw their own fear card (each player was required to write their worse fears on card at the start of the game) won. As I said it was the Gatekeeper that made the game, always screaming at you, calling you a “little maggot” and demanding that you answer him each time with “Yes my Gatekeeper!” if you followed the games request to turn the lights down and the sound up and you obeyed the Gatekeeper the game was tremendous fun, and I look back on it fondly. Following on from the success of the first game three game expansions were released with each one containing a new tape featuring a new host, Baron Samedi the zombie hosted the second expansion in 1992 (again played by Wenanty Nosul) before actress Frederique Fouche played Anne de Chantraine the witch in 1993 returning as Elizabeth Bathory the vampire for the forth in 1994 sadly the Khufu the mummy expansion due for a 1995 release was cancelled due to declining sales however that wasn't the end of the Nightmare.

Armed with feedback received from players of the original game A Couple 'A Cowboys struck a deal with J. W. Spear & Sons to develop the new game and released the Harbingers game a major update of the series and within a few months of its release it become one of the top ten best selling games in the United States and the United Kingdom. It was soon followed by two more booster tapes and an add-on game called The Soul Rangers there was even a version for the PC called Atmosfear: The Third Dimension. Then after nine years of development A Couple 'A Cowboys and Flying Bark Productions released Atmosfear the Gatekeeper in 2004. Now on DVD instead of a VHS this medium offered random programming assuring new game each time and six months after its resale the game was once again a hit selling 60,000 copies then with its international success in over 18 different countries it grew to 600,000 with worldwide sales and then in 2006 eleven years after its cancellation Khufu the mummy finally had his own game with Atmosfear Khufu the Mummy. I must confess that I hadn’t realized that the series had returned and so when my stepson asked me if I had played Atmosfear we were talking about two completely different games! I thought it had a lot of promise but as impressive as the prosthetics were on the Gatekeeper it didn't really appeal to me, my heart belonged to the original. He may well have been a Gatekeeper but he wasn’t, “My Gatekeeper!” This painting done in acyclic and pen features the Atmosfear board and pieces with the Gatekeeper leering overhead (complete with poor VHS tracking) to the side we see the other hosts Baron Samedi, Anne de Chantraine and Elizabeth Bathory while a little maggot who's turn it is throws the die- to discover his fate! Hope this painting brought it all back for you! Comment below if you ever played it!

This leads me rather neatly to a bit of news, I would like to announce that I have a book in the works! Arfon’s Monster Memories will be a personal trip down memory lane as told through my paintings (like the one featured in this post) recounting growing up as a monster fan during the Eerie Eighties and Nightmarish Nighties! Penned for 2018 I hope that the book will be a feast for the eyes and brain- Follow this site or the Facebook page for further updates or e-mail me direct at arfon@arfon.net to be kept in the loop!
Happy Halloween!

© Arfon Jones 2017. All images are copyrighted throughout the world.
Posted by Arfon Jones at 7:10 pm