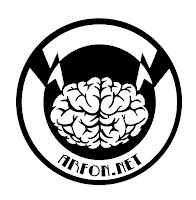 Hello. How was your Christmas? Did you get anything nice from Santa? Jolly good! Well, as the time of celebrating long held customs and traditions draws to a close I shall end it with my own annual tradition of uploading a blog post devoted to the previous twelve months... Without a doubt 2016 has been a Knightmare year for me, partly as it was the year I met Hugo Myatt the man that played Treguard (of Dunshelm) the dungeon master on one of my all time favourite television programs Knightmare! I met him at this year’s Wales Comic Con and it was a genuine delighted to meet him and discover what a genuinely nice man he is! I told him how much of a highlight the show had been for me and how Mrs Jones had teased me on how I had found certain scenes in the programme to be quite intense at the time. Scenes such as Corridor of Blades, the sound of a Goblin horn in the distance or the series’ antagonist Lord Fear, (played by Mark Knight) realising he was being watched through the spyglass had me on the edge of my seat back in the day! Although it was the year I was able to say “hello” to childhood heroes sadly we have had to say “goodbye” to a great many others. We lost David Bowie at the start of the year and being the trend setter that he was he set the trend for heroes, legends and talented people who died one after another! Much like previous years this list reflects people that ‘inspired’ me personally in some way or their work I have enjoyed over the years (at the time of posting this post! *) RIP  Paul Daniels, Michu Meszaros, Ronnie Corbett,  Sir Terry Wogan, Prince, Frank Kelly, Pete Burns, Gene Wilder, Kenny Baker, Caroline Aherne, Victoria Wood, Alan Rickman, Muhammad Ali, Vivian Gray, Frank Sinatra Jr, Joe Alaskey, Tom Neyman, Harambe, Andrew Sachs, Don Calfa, Bruce Lacey, Van William, Robert Vaughn, Peter Vaughan, Steve Dillon, Florence Henderson, Ted V. Mikels, John Glenn, Ian McCaskill, Bernard Fox, Chyna, Zsa Zsa Gabor, Deddie Davies, Liz Smith, Richard Adams, Rick Parfitt, George Michael and Carrie Fisher.
When I wasn't shocked over the latest celebrity death I was working in the studio (or in one case in a care home) working on a woodland mural or something for the Eccentric Party, Cannibal Cop, Slashermania or the final issue of Slaughterhouse Farm. I also worked on  some arfon.net Badges and T-shirts, a tribute to my former school teachers, something for the Heath Robinson Museum and the InternationalCryptozoology Museum and if I wasn't doing any of those things I was out exploring.... 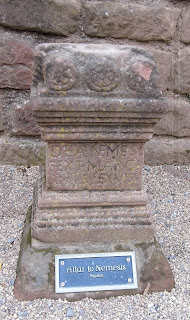 Altar dedicated to Nemesis, Chester
The Chester amphitheatre is one of the largest known from Roman Britain. Half of the Eastern and northern sides are visible and accessible to the public and well worth a visit. Constructed at around 70AD by Legion II Adiutrix and abandoned at around 350. To the right of the northern entrance there is a small room called the 'Nemeseum' which contains an altar dedicated to Nemesis the goddess of fate, divine vengeance and retribution. The inscription reads: DEAE NEMESI SEXT - MARCI ANVS V S - EX VISV ("Dedicated to the goddess Nemesis by Sextus Marcianus, after a dream.") Discovered in the excavations in the 1960's it is believed that offerings would have been made before a performance at the amphitheatre to prevent an untimely death. This is a replica, the original is on display in the Grosvenor Museum equally worth a visit. 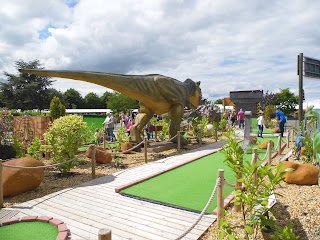 Jurassic Golf Bridgemere
Located at the Bridgemere Garden Centre Jurassic Golf Bridgemere is worthy of its own Prehistoric Pining post! This 6,000 square foot 12-hole adventure golf course is brilliant, because it offers fibreglass dinosaurs and a roaring animatronic Tyrannosaurus Rex! Family fun assured as it offers you the chance to test you crazy golfing skills while learning about these magnificent beasts! 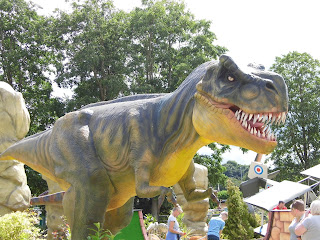 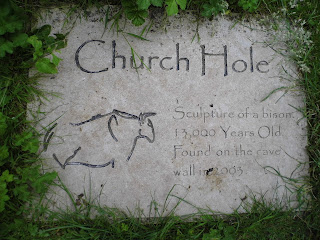 Creswell Crags, Holbeck
Not only was this limestone gorge on the Derbyshire/ Nottinghamshire border once inhabited by Ice Age animals such as hyenas, mammoths, woolly rhinoceros, and migrating herds of reindeer, horse and bison but humans too! The site contains several caves that were once inhabited by nomadic human groups between 55,000 and 10,000 years ago making Creswell Crags the most northerly point on earth to have been visited by our ancient ancestors. Having not only discovered tools formed from stone, bone and ivory there they also recently discovered 13000 year old engravings of deer, birds, bison, and horse there making it the oldest art gallery in Britain? At the East End of the gorge there is a museum and education centre filled with wonderful finds that I strongly suggest you look round, oh and book their tours- well worth a visit. 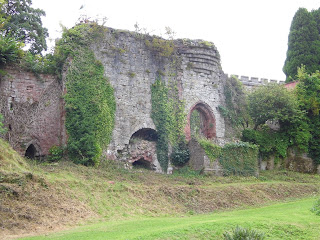 Ruthin Castle, Ruthin
Constructed on a former Iron age fort during the late 13th century by Dafydd ap Gruffydd brother of former Price of Wales, Llywelyn ap Gruffudd. Standing on a red sandstone ridge 100 feet above the Clwyd valley and overlooking a strategic river crossing the land was granted to Dafydd ap Gruffydd by Edward I in gratitude for his assistance during the invasion of North Wales. It was then taken over by Reginald de Grey who strengthened and extended the castle in 1295. Many years later, 1826 in fact a grand house was built over the south-eastern quarter of the castle and in 1923 the castle became Britain's first private hospital for the investigation and treatment of obscure internal diseases before closing in the 1950's. It was then transformed into a hotel in the 1960s and has remained one ever since. One notable guest who stayed there was Prince Charles who spent the night before his investiture as Prince of Wales in 1969. 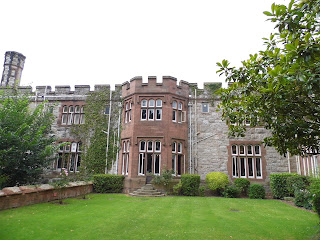 Mrs Jones and I spent the night there too in 2006 having attended one of their Medieval banquets, we retuned there this year and were treated to a tour of the castle and its grounds (previously off limits to the public) by the Ruthin Castle Conservation Trust. A trust formed this year in order to raise awareness and funds needed for urgent repairs. Despite all its history the castle has not been awarded a world heritage site status, and so as a result it has been slowly crumbling away and the trust hopes to restore it and establish the site as a visitor attraction in its own right giving it the clear identity that it so richly deserves (visit this link to make a donation or become a member). Oh, the castle (the hotel) is also mentioned in my favourite travel guide 'Haunted Britain: A Guide to Supernatural Sites Frequented by Ghosts, Witches, Poltergeists and Other Mysterious Beings' written by Antony Hippisley Coxe and published in 1973 which brings us rather neatly to the subject of haunted hotels. Whenever we go travelling, Mrs Jones and I (when possible) check into reputed “haunted hotels” and this year we visited three, the first I previously mentioned the second was... 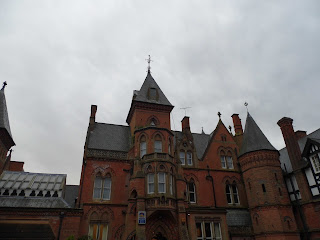 Bestwood Lodge Hotel, Arnold, Nottinghamshire
Ten miles from Sherwood Forest and reputedly haunted by orange seller, actress and long time mistress to Charles II Nell Gwynn who's spirit is said to be responsible for the mysterious smell of oranges discovered in rooms frequented by children. Staff at the hotel have also reported figures walking around the corridors and disappearing shortly after along with disembodied voices coming from the cellar, where bodies are said to be buried. In one instance a member of staff changing a barrel reported the lights going off and a voice asking, “Can I help you, Sir?” Bestwood Lodge has been a hotel since the 1970s and a very nice one it is too, a popular venue for wedding functions and as a result the lady at the front desk had no interest in answering my questions regarding the spectres at the hotel. 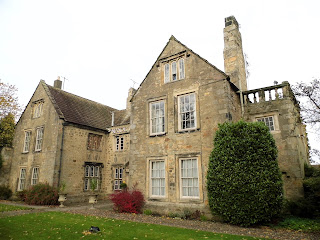 The Manor House, County Durham.
Once a farmers’ dwelling built between the 15th and 16th centuries this building has at some point existed as a convent, a court house and orphanage before becoming the rather nice hotel and country club it is today. Apparently room six is haunted by a young crying boy looking for this mother who may or may not be the ghost seen on the upper floor reportedly searching for her son. Random cold spots and floating objects have been reported throughout the property, although Mrs Jones and I did not stay in room 6 we did hear a strange child like sounds early in the morning... make of that what you will.

Well, I hope that was of interest, aside from doubling the work load and producing content three resolutions have been made for the new year the obvious promise to loose weight, post more of my work on here and think of a better title for these end of year blog posts! As ever a big thank you and Happy New Year to all my friends out there old and new, all that have supported my work this past year and visted the site not forgetting the special ‘shout out’ to Mim, Kid, TwoHeadedBoy, Moira and Ddraig Goch for commenting on my posts its always good to know that someone is actually reading these posts!
Ok then, Last one to 2017 is a rotten egg!


© Arfon Jones 2016. All images are copyrighted throughout the world.