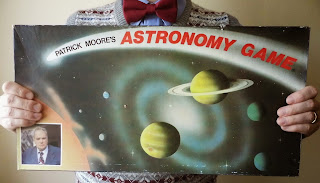 It was a simple enough premise, a mini feature devoted to obscure board games that feature a ‘tv boffin’. The first one which I wrote covering David Bellamy’s ‘Save The World!’ was written back in 2012 and to say that I had fallen behind on this feature would be an understatement. So without any further ado I present for you 'Patrick Moore’s Astronomy Game’! Produced by Selsey, based (much like Patrick Moore himself) Whim Games Limited in 1980, part of Quantum Games’s line (also available ‘The Solar System Game’ and ‘First Galaxy G1’). I’ve had this game for some years now remember the time I told Patrick that I had it, his response “where on Earth did you find that?!” The game encourages players to explore the solar system and outer space, visiting celestial objects and obtain information and points. Included in the box are Astronomical Notes provided by Patrick himself and the rules that tell us that the object of the game is to, “Explore the Solar System and outer space, to visit celestial objects and obtain information and points. The game starts and finishes at the Earth, and the winner is the one who gains the most points, not necessarily the first one back home.”

The game can be played by up to six players and requires the players to move along the track, through the solar system and into outer space and back to Earth, visiting as many celestial bodies as possible.
The game consists of a die, six coloured playing token rockets, game board, Fuel units, Point cards and Hazard cards. A Mission Controller is elected and is placed in charge of the allocation of fuel units and point cards during the game. Then each player is issued with a playing token and 10 Fuel Units, the die is thrown by each player and the one with the highest score starts the game. Players must then follow the black arrows on the outward journey and red arrows on the return journey. After completing one Earth orbit the player selects which path to take, either straight to Mars and the outer planets or inwards for Venus and Mercury! Whichever mission you embark on you need to collect point cards as you go. There are Planet Photography cards or Sample cards (that are only obtainable when the player lands on the exact planetary orbiting spot marked by a blue ring) a player may overshoot and will require several throws of the dice until eventually landing on the desired spot. The Fuel cards may also be used to achieve this goal (or help avoid an astronomical hazard in your path) but only if you move backwards. A Fuel unit card is surrendered at a rate of one unit per square and if a player runs out of fuel units they must miss a turn for each unit required. There are Hazard squares and if a player lands on one of them they are required to pick a Hazard card and carry out the instructions, such as “Spacecraft Communications fault Loose 2 Fuel Points” or “Go back to nearest planet for repairs”
Player are given the opportunity to dock if they land on an occupied square provided that they “both agree” not on a hazard square and moving in the same direction. By doing this both players receive equal amounts of points and can remain like this provided they don’t land on an undocking square or draw an undocking card in the hazard deck then they will have to separate. 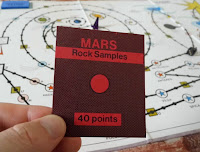 To transfer from the Solar System to outer space players must throw the exact number to reach the exit square (fuel units are not permitted!) and then throw an odd number to get to an entry square! Once you arrive here you then have three paths to choose from with the agenda of reaching the furthest point of the track before returning to the Solar System collecting Star cards as they go along. Avoid Black Holes these will send you to the Solar System transfer square and forcing you to re-cross the outer space track once again! Having thrown the exact number required to return to the Solar System you need to make you way back to Earth and achieve the exact number to finish, if not the player will have to keep orbiting the Earth until they do so! The first player to land on Earth is awarded 100 points, the second 50. Scores are then tallied, the player with the most points is the winner!

The game is rather quaint, the trick is to try to use fuel cards sparingly, and of all the times we have played it we have never docked as we usually have our own missions in mind! But its certainly a fun little endearing game that represents Patrick’s everlasting mission to inspire future generations of astronomers and astronauts.  If I had to compare it to a better known board game it would be Monopoly, but imagine Monopoly encouraging you to learn about the property you land on, take photographs and take samples instead of buying it. They come up on eBay from time to time, so check it out.