A Monster Memories Special: The Legend of Ghetty Chasun the Twenty-Year Vampire Mystery 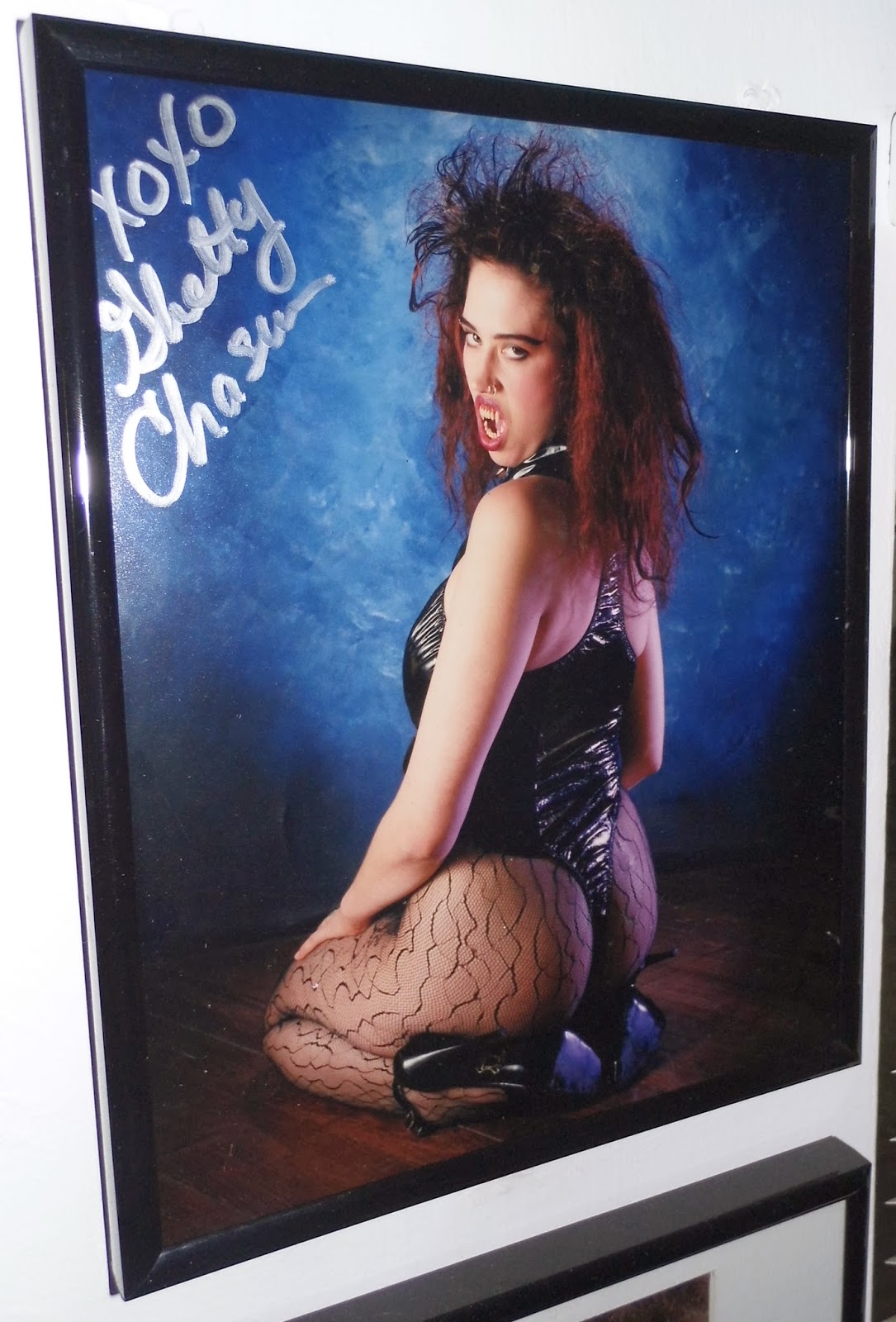 I have long retained an interest in monsters and horror movies, and for a short time in the early 1990’s developed a particular fascination with vampire movies resulting in my obtaining this signed photograph which has now been in my possession for the last twenty years. Despite all that time I never actually knew who the lady was, I wasn’t familiar with her work and I couldn’t make out the name so her identity eluded me. Guesses would be made from time to time and typed into Internet search engine but to no avail. I didn’t even know what the photo actually promoted until one evening, when I decided to post the photo on my Facebook page to see if anyone knew who she was. I was delighted to learn that she was in fact one Ghetty Chasun. Armed with a name I turned to Google to find out more about her but frustratingly, the Internet yielded very little information. IMDB informed me that she was born January 19, 1970 in Erie, Pennsylvania and that she had starred in six movies between 1993 and 1997 and Scottish band Sawyer named a song after her in 1994. Never one to give up I kept digging in my quest to find out more about Miss Ghetty Chasun and the origin of the photo!

My research began with issue#2 of Killing Moon magazine from 1994, Miss. Chasun’s first movie credit was for Hugh Gallagher's 'Gorotica' (1993) playing Carrie a necrophiliac that stole corpses from graveyards for her own means... She took part in a short interview for the magazine to promote the movie and in the interview in which she names Elvira as one of her personal heroines, editor Alex J Low asked her what her personal interests where, she replied that when she wasn’t acting she created. Elaborating that she was part of a two-woman “hyperactive performance” art group called Sister Nagster and that they specialised in acts involving nudity and sexuality “We have always got a project in the works. We write create, produce, direct perform, publicise and finance every thing on our own.” When asked if she had other video or film credits to her name she answered that she had a “very, very small nude scene” in an independent art film called ‘Tut’s Small Ballad’ and that she had hosted a (unreleased) video documentary by Donald Farmer (director of 'Demon Queen' and 'Vampire Cop') who she acknowledged again when asked how she was cast in Gorotica. He was a friend and regular at Sister Nagster performance pieces and after various video projects fell through he, introduced her to Hugh Gallagher who was looking for an actress and she was cast. When asked about future roles she explained that comic book artist John Michael McCarthy had been co producer on Gorotica and that he planed to make a movie adaptation of his Cadavera comic.  (This was not to be however, as she was instead cast as Candy in 'Damselvis, Daughter of Helvis' (1994) based on another John Michael McCarthy comic) Along with a sequel to 'Truth or Dare' she mentioned a long-term project that she had been working on with Donald Farmer, she in fact went on to work on three movies with him 'Vicious Kiss' (1995) 'Red Lips' (1995) 'Demolition Highway' (1996)

Suspecting that the photo I had was from Red Lips I concentrated my efforts there, Scream Queens Illustrated #7 ran a making of Red Lips feature which was written by Donald Farmer himself with photographs provided by photographer Mike Manikowski. In this movie (also staring Michelle Bauer of 'Hollywood Chainsaw Hookers' and 'Dinosaur Island') Miss. Chasun played Caroline a woman down on her luck that accepts a hundred dollars to participate in a experimental drug trial only to develop a slight ‘side effect’… the need to feed on blood!
Having explained the premise of the film Farmer expressed his hope that the film would follow in the footsteps of other great lesbian vampire movies, such as 'The Vampire Lovers' and 'Lust of a Vampire'. Believing that the timing was perfect, as Hollywood seemed to have revived its interest in vampires with the release of 'Bram Stoker’s Dracula' and 'Interview with the Vampire'. When discussing his association with “rising horror star” Miss. Chasun, the before mentioned abandoned video project crops up, being described as a film about "psychotic abortion clinic protesters”. We learn that after working on Gorotica Miss. Chasun had co-stared in a Nashville production of the B-Movie inspired play Women Behind Bars. Rounding out 1994 playing the sole female role in a Pensilvania run of Vampire Lesbians of Sodom! Movie and stage work aside he called her a radical performance artist, mentioning Sister Nagster and relaying that both Miss. Chasun and her partner were once arrested by the Nashville Police Department after an outdoor performance violated a Tennessee ordinance on public nudity! As the article draws to a close, Farmer shared his enthusiasm for Miss. Chasun’s portrayal as Caroline. Adding that she could be “a bit overzealous in her vampire mode” as she would bite through the foam latex neck pieces as planned, but would also tear prosthetics, gnaw on the blood bladders beneath them, and begin on the actor under the latex! Adding that she had once managed to snap off a dental acrylic fang on fellow actor Danny Fendley’s neck! Closing with “Needless to say, the actress was really into her part!” Now with no doubts that the photo was connected to Red Lips﻿
I contacted Donald Farmer working on his latest movie 'Shark Exorcist' to enquire further about it. He very kindly confirmed his association with Ghetty Chasun informing me that it was in fact Leslie Q who played a night club performer in Red Lips that first introduced him to Ghetty Chasun back in 1992. (Interestingly he also told me that Leslie Q’s performance in the movie was filmed at Lucy's Records in Nashville however the shots of Chasun and Michelle Bauer watching her perform were filmed in Brooklyn!) When I enquired about the photo that I had, he confirmed that it was indeed from Red Lips and that it was one of a series of shots taken by Mike Manikowski to promote the movie at the 1995 Chiller Convention in New Jersey. Seemed that Miss. Chasun had been in attendance at the event, meeting fans, signing photos, VHS’s and apparently there was even a limited edition action figure! But, what happened after that? What become of Ghetty Chasun after 1995? What was she up to as this photo hung on my wall? Having made her last movie with Donald Farmer 'Demolition Highway' she worked on a movie missed out by IMDB, Raoul Vehill’s independent short film ‘Horrorgirl’ (1995) before working with John Michael McCarthy one more time, this time being made up as an old woman for 'The Sore Losers' (1997) and this was to be here final movie. Miss Chasun then opted for working behind the scenes instead, achieving a 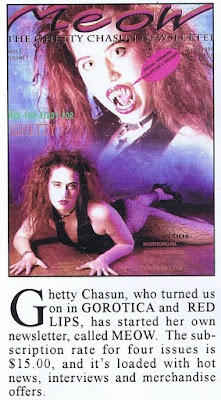 MFA in Cinematography from the American Film Institute in Los Angeles, Ca. and a BA in film/video from Columbia College Chicago later becoming a freelance Director of Photography. Shooting independent, narrative film shorts working as both a camera operator, gaffer and lighting technician. So there we go, a Twenty-Year Vampire Mystery solved. I hope this humble attempt to document Miss Chasun’s career proved to be a little more insightful than a vague IMDB page and that it shed a little light on her work. If only to right the Internet’s wrong and help out anyone that happens to ask the same question I did about the legend of Ghetty Chasun.


© Arfon Jones 2014. All images are copyrighted throughout the world.
Posted by Arfon Jones at 11:02 pm