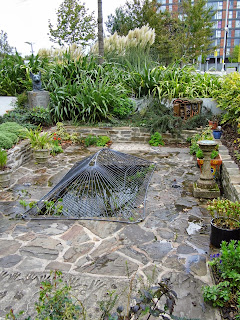 Beth and I recently found ourselves wandering around Salford’s MediaCityUK searching for an iconic point of interest, a small piece of popular British culture, arguably one of the most famous gardens on the British Isles, the Blue Peter Garden!
Always a regular viewer of the program I had aspired to one day visit it and see where George the Tortoise (1920 – 2004) once roamed, this was that day!
Designed by Britain's “first celebrity gardener” Percy Thrower MBE (1913 –1988) back in 1974 and later adapted to an Italian sunken garden in 1979 the Blue Peter garden has remained as much a regular feature of the program as the advent crown. The garden flourished over the years, despite several vandal attacks (the most notorious being the 1983 incident) and when the program's production moved from London Television Center to MediaCityUK in 2011 the garden too was relocated and officially reopened to the public by HRH the Princess Anne in 2012. 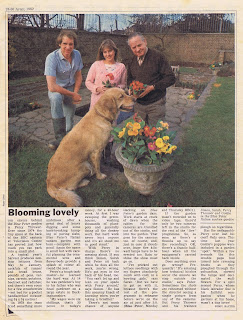 The garden still contains elements of the past as seen in this article from the 24th -30th edition of the Radio Times from 1982 (right)  within it such as the impressions of Percy Thrower, Lesley Judd, John Noakes and Simon Groom along with the pets Shep, Goldie, Jack and Jill and Freda the tortoise! It was amazing seeing them in person! Standing in the corner, standing guard almost was what I especially wanted to see the bronze statue of Petra, Blue Peter’s first pet. As I have previously mentioned I was a regular viewer of show, tapering off at around the time of the unearthing of the Blue Peter time capsules. However my earliest memory of the program was the time they relocated the Petra bust from outside BBC Television Center into the garden and from that moment on I have always admired this magnificent statue. 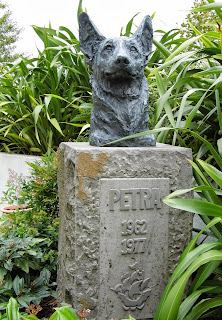 The statue regards Petra the dog who first appeared on the program in 1962 winning a special place in viewer’s hearts, so when she died in 1977, a special bronze bust was commissioned from Blue Peter artist William Timym MBE (1902-1990). Timym had worked as a syndicated cartoonist for many years but more famously worked on ‘Bengo’ and the 'Bleep & Booster' series, and which featured on Blue Peter in its early days. A skillful sculptor Timym had created a miniature of Petra and a lion’s head for the Zoological society of London in 1976 (he would later create the life-size sculpture of 'Guy' the Gorilla for London Zoo in 1982). The bust of Petra was to be erected outside Television Center as documented by Peter Purvis’s ‘Goodbye Petra’ article in the Fifteenth Blue Peter book, “As she’d come and gone through the main gates of the BBC’s Television Center every week for most of her life. We could think of no better place for Tim’s bronze than just inside those gates, next to our Blue Peter silver birch and the box we buried for the Year Two Thousand which includes her photograph, as well as those of Jason and Patch.”

The article also documented the producing of the sculpture (right). Using several drawings he had made of Petra over the years as reference, Timym sculpted the bust from clay on an armature. Three weeks later the sculpture was taken to the Sculpture Casting Studio near High Wycombe to be cast in bronze using his trademark  “lost wax” process. Once the bust was complete markings were added using acid and a blowtorch.
When it came to the plinth several people contacted the Blue Peter office wishing to donate granite to the cause when it was suggested “on the air” that concrete would have to be used as it was all the program could afford. Although they were offered granite from the original London Bridge, they went with the first offer they received by Gelli Stone, a quarry in South Wales, which had the appropriately named Blue Pennant stone on offer (which had also been used to repair the Tower of London). Once the right piece of stone had been selected the quarry’s most experienced mason, Des Wilkins cut the plinth to size adding the inscription and Blue Peter ship before transporting it to London. Then on the 23rd of March (Peter Purvis’ last episode) the bronze was erected. With Lesley Judd pouring the concrete onto the top of the plinth as Peter Purvis and John Noakes lowered the head on. It stood outside BBC Television Center until 1984 when the building was extended when it was relocated (along with the 1971 time capsule) to the safety of the garden and it has been a part of it ever since. 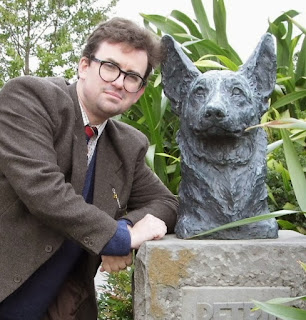 When I heard that the program was being relocated to Salford I wondered what would become of the garden because I’m like that, I become concerned over what many others would disregard as simply sentimental nostalgia. But seeing it living on in another part of the country, I found it reassuring and surprisingly moving. I highly commend the ones responsible for preserving the garden and making it available for the public to visit. If you ever visit Salford’s MediaCityUK be sure to go and visit it.

© Arfon Jones 2013. All images are copyrighted throughout the world.
Posted by Arfon Jones at 5:22 pm